Just in time for the release of my latest book, I was lucky enough to be interviewed by author Veronica Scott in the “Happily Ever After” column in USA Today. See it here.

We talked about my first book, Overload Flux, and how it came about, details about the big damn story arc that it's part of, and what's next in the series. Veronica also writes science fiction romance — check out The Wreck of the Nebula Dream.

If I had a publicist, that would be the headline of the press release that we'd send out to other media. Actually, my publicist would likely refuse to send it out, because it's not really news, and it'd old hat to best-selling authors and those with publicity machines. Publicity is often called “earned media,” to distinguish it from “paid media,” a.k.a. advertising. To me, though, it's a little milestone: My books, and possibly my charming self, are interesting enough to cover in a national newspaper. Sometimes, it's the little victories that feel nicest. 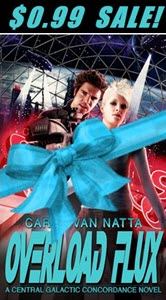 To celebrate a few of my fifteen minutes of fame, Overload Flux is on sale this weekend for only $0.99 (and the equivalent price elsewhere). If you've been procrastinating in buying a copy, now's your chances. If you've already read it, you could pass this along to friends and family to get them in on a great deal.

And in case you're wondering, I'll have a brand new book out in the Central Galactic Concordance series in the next few days. Pico's Crush features new characters and a new story, but also has cameo appearances by characters from the previous books, including Luka Foxe and Mairwen Morganthur from Overload Flux, and Lièrén Sòng from Minder Rising. 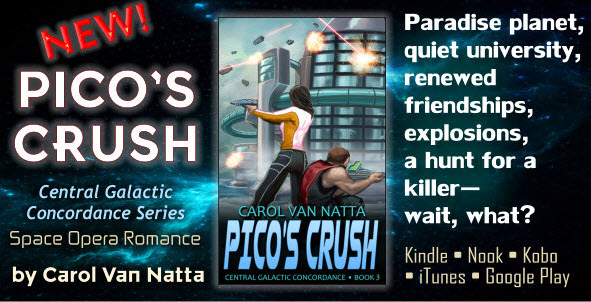