Cats of War Excerpt #2, in Honor of the New Release

Cats of War released yesterday—hooray! My Central Galactic Concordance (CGC) space opera series has a grand, sprawling plot going on about evolutionary change and rebellion. I love all its twists and turns, but sometimes I like to take a break and visit the unexplored places in my CGC universe. Novellas, such as CATS OF WAR, which debuted in the 2018 limited-edition Embrace the Passion: Pets in Space 3 anthology, are my chance to play. In this case, I explored future crimes and punishment, and their implications for the galactic civilization at large. And, of course, wrote another story with cats. 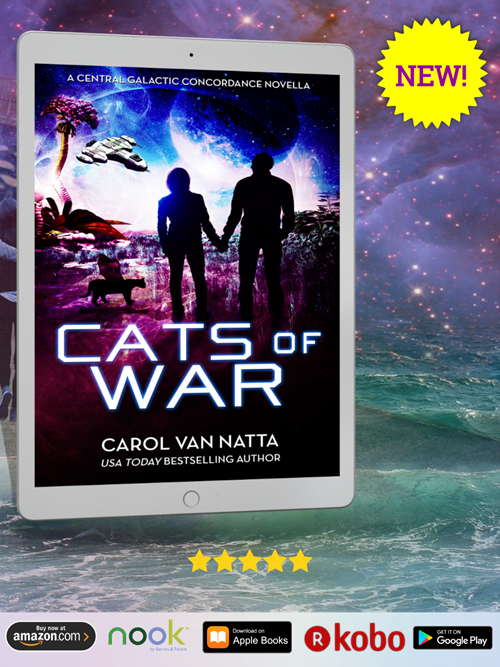 My previous Pets in Space novella, Pet Trade, centered on shady pet trade industry. For CATS OF WAR, the backdrop is the CGC’s Criminal Restitution Indenture and Obligation (CRIO) system.

For lesser crimes, convicts must pay fines, or be sent to the CRIO system to work off their obligation. The CGC government partners with private industry and assigns indenturees to provide the labor. Like any other human-created institution, the CRIO system can be gamed, and there are rumors of hellholes.

One of the better CRIO installations is the setting for CATS OF WAR. The facility itself is in the middle a swamp. It filters rare-earth metals from mountain water runoff, which the government uses for building faster-than-light stardrives. On paper, it’s a win-win. Reality is more complicated.

The hero of CATS OF WAR, Subcaptain Kedron Tauceti, is the military liaison for indenturees who are veterans. He had no more choice in his assignment than did the heroine, indenturee Ferra Barray, who is doing restitution time for property damage.

Ordinarily, they’d have no reason to interact, but they are brought together by the unlikely arrival of two mysterious creatures who need their help—or might be the help that both Kedron and Ferra need when trouble comes to call.

Here’s a little excerpt from CATS OF WAR:

While Kedron wouldn’t miss the Argint d’Apa facility, he would miss the swamp. He’d disliked it at first, the same way most staffers still did, but it had grown on him. He’d spent time studying its ecology and gone with the biodiversity scientists on a few sample-collection expeditions. Living so close to untamed nature made it easier to understand how everything, from the majestic giant trees to annoying clouds of gnats, had a place. Maybe he did, too, even if he couldn’t see it.

He put away his uniform and decided to walk laps on the campus’s wide perimeter walkway, rather than spend another evening alone in the gym. Regulations restricted it to military personnel, and he’d never seen the CPS representative use it.

As much as possible, he kept his interactions with her in virtual space. As a mid-level telepath, she could read thoughts, and as a low-level sifter, she could affect brain chemicals, detect lies, and sense the use of active minder talents. Military personnel caught with minder talents earned an immediate, permanent transfer to the CPS’s Minder Corps.

Kedron’s minder talent wasn’t much, just an ability to use seemingly unrelated information to find things of interest, but he’d rather direct traffic for a city of half a billion or be an indenturee than work for the Minder Corps. Too many private family stories warned of how badly the Minder Corps treated its personnel. He’d learned to hide his talent well enough to beat the CPS Testing Center for mandatory age twelve and seventeen tests, and random ones since, but some sifters were better than the testing equipment. Fortunately, minder talents in the patterner class were hard for even high-level sifters to detect.

He pulled on pants and a specially treated long-sleeved top to ward off biting insects. Last, he stepped into one of his few indulgences—custom-tailored, waterproof, adaptive boots. Even with myriad modern transportation options, Ground Div gunnin, from the lowest ranker to High Command commodores, spent a lot of time walking, running, and marching. Good boots made all the difference.

He looked out the north-facing window of his quarters to check the weather and the path. Non-essential indenturees were on lockdown, and half the staff was busy, so he wasn’t surprised to see it deserted. The tall perimeter fence’s horizontal power lines beyond the road-glass pathway glowed faintly as reminders of their presence. The overhead and glass path lights

blinked on and off erratically, then stayed off. Twilight and mold sometimes messed with the sensors.

Shadowed movement caught his eye. Someone carrying a shallow, rectangular crate stepped off the path toward the exterior powered fence. The figure knelt right in front of the fence and set the crate down. After furtive looks left and right, the hunched figure slid something under the fence.

Instead of zapping the person into insensibility or setting off the alarm, the visible bottom three fence lines between the two posts raised like a curtain, leaving a torso-height gap. The figure quickly extended a pole to push the crate outside the fence as far as possible, until it butted up against the big rock outcropping. He or she retracted the pole and picked up the device from the dirt. The fence line sank and straightened to its usual position.

The lights flickered on briefly. The figure pulled on a hood and hunched forward, but he’d already recognized the face. Ferra Barray.

Read the rest in CATS OF WAR 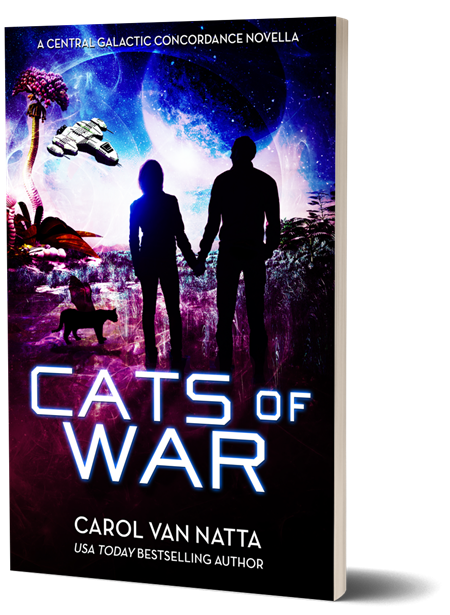 NOTE TO READERS: Cats of War debuted in the limited-edition Embrace the Passion: Pets in Space 3 anthology. It has been edited for clarity, but is substantially unchanged from the original. If you already have the anthology, you don't need to buy this story again (unless you like your books standalone). For fans of the Central Galactic Concordance series, the events in Cats of War take place after Jumper’s Hope, but are not part of the ongoing big damn story arc.