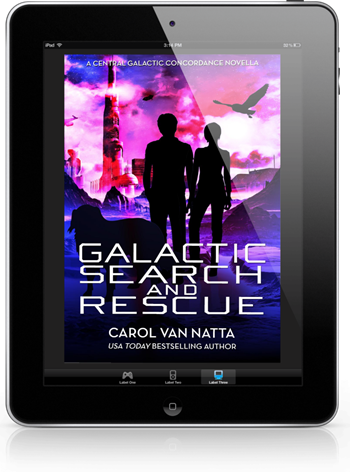 This is the excellent cover for Galactic Search and Rescue, which is slated for release on Thurs., 20 May 2021. The talented Amanda Kelsey designed it, and I love the eye-catching colors that hint at disaster.

The story originally appeared in 2020’s science fiction romance anthology, Pets in Space 5. The new standalone version of Galactic Search and Rescue expands on the original. No spaceships were harmed in the making of this novella, though quite a few buildings didn't survive the earthquake. See below for an excerpt.

The limited-edition Pets in Space® anthologies benefit the charity, Hero Dogs. The organization trains and provides service dogs for disabled veterans and first-responders.

The inspiration for the story came from seeing news stories about the brave and crazy people who responded to deadly wildfires for rescue and recovery. I got the idea for the story’s unusual animal team after reading a story about giant pouched rats trained to detect landmines. We’re only scratching the surface of forming partnerships with animals to help others.

About Galactic Search and Rescue (GSAR)

A disaster threatening an entire town. An underfunded rescue team with unusual animal helpers. Can two first-responders save the day and find love? Tech-whiz and telekinetic Taz Correa is terrified her secret affection for her teammate will show and cost both their careers. Animal telepath Rylando Dalroinn can’t admit his own against-the-regs attraction. Sent as a team of two, plus an unusual squad of trained animals, to an earthquake zone, Taz and Rylando will have to throw out all the rules to save the devastated town… and each other.

Taz tapped her temple. “Before I forget, I think Red Team also took our last set of flying-camera eyes when they took our comms. You might want to inventory the rest of our gear to see what else they ‘requisitioned.’ I’m going offline for a nap.”

“Wait,” said Rylando. “Hatya said not to relieve her until fourteen hundred. She’s still on light duty, so she said she may as well take advantage of the enforced rest. Her hip is acting up.”

Only Jumper Command would regard urgent, high stress, dangerous search-and-rescue missions as “light duty.” Hatya groused that her new cybernetic leg and hip hadn’t worked right from the start, which was why GSAR and Silver Team had lucked into the temporary assignment of an expert-level pilot.

“Good for her.” Taz was afraid it was something worse than slow healing. The whole galaxy had heard rumors of the pernicious waster’s disease that afflicted too many retired Jumpers, but it wasn’t something active-duty Jumpers ever talked about. “That’ll give me time to finish recalibrating the animal autodoc. The other teams might need it if their dogs get hurt.”

As Rylando crouched down to place the bowl on the floor, he looked up at her. “After all the repairs you’ve done for GSAR, you could get a job on any planet as a tech specialist once you term out of your contract.”

Taz laughed. “Only if they don’t care that I only follow the official instructions as a last resort.”

Plans for a life after the military topped the list of favorite discussion topics in GSAR. Hardly anyone in the organization had a surviving relationship with partners or family, or even outside friends. A lot of retirement dreams centered around changing that.

A longing for rest pulled at her like high gravity. “I love the rescue mission, but most planetary response teams rely on volunteers. Sadly, grateful thank-yous from the rescued don’t pay the rent.” She tilted her head toward the ship-loader assist frame in the corner. “I’d have a better chance as a construction-equipment operator. Some companies like hiring telekinetics. What about you?”

His head dropped as he poured water in the bowl. “Haven’t given it much thought, really. I’ll see what presents itself when my contract terms out in three years.”

Taz knew he was shading the truth, but she couldn’t blame him for wanting to keep secrets. She had plenty of her own.

Shake Up Your World with Galactic Search and Rescue

Galactic Search and Rescue will be available at your favorite ebook retailer on 20 May 2021. For paperback fans, I've got you covered. It will be out later this year. I'll let you know in my newsletter (sign up here), or you can check the GSAR book page from time to time.