Guest Post by Ruby Lionsdrake, About Her Pet in Pets in Space

Note from Carol: I'm thrilled to be a part of the Embrace the Passion: Pets in Space 3  science fiction romance anthology, in part because I get to work with fabulous authors such as Ruby Lionsdrake, author of the Mandrake Company series. Well, actually, Lindsay Buroker is the author — Ruby Lionsdrake is her not-so-secret pen name. Luckily, Lindsay agreed to come to my place for virtual tea and gluten-free crumpets to tell us all about the pet in her anthology story, Quashi.

I’m Lindsay Buroker, writing as Ruby Lionsdrake in this anthology, and I was a serious Trekkie as a kid. My mom introduced me to the original series when I was about five, and I adored it, and I especially adored the “Trouble with Tribbles” episode. When it came time to write a science-fiction-romance story centered around some alien space critters, I immediately thought of those tribbles.

Of course, I wanted to do something a little different that could fit into my Mandrake Company universe (specifically, the mercenary ship where the rest of the series of sci-fi romances takes place). So I added some legs, antennae, and a bit more personality to my “tribbles” and called them Quashi. Instead of simply spawning a billion others of their kind, they help solve… oops, that would be a spoiler. Let me just give you a snippet from my story that introduces the Quashi: 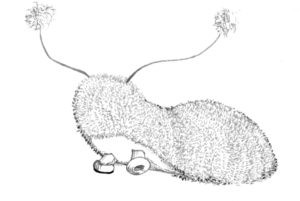 “Yes, according to the encyclopedia, it’s a quashi from Vedana Moon,” Kor said. “Vedana has an atmosphere similar to that of Old Earth northern and southern latitudes and was never terraformed, though its relatively cold climate has kept it from being popular to colonists. A finance lord owns the largest continent on the moon, but it remains largely undeveloped. It’s the home to the quashi. They’re popular pets on Vedana, but are somewhat unanimated in temperature ranges that humans prefer—they prefer climates under zero Celsius. Their inertness at warmer temperatures makes them…” He waved at the creature in Chanda’s arms; it appeared to be slumbering now. “Unexciting to humans and children seeking more lively companions.”

Mandrake looked at Keys. “No chance you can experiment on them?”

“You can’t experiment on something that… that trills,” Chanda blurted.

Everyone in sickbay looked at her, and her eyes grew abashed, as if she realized she shouldn’t chastise the captain of the ship, but she lifted her chin and drew the creature closer to her chest.

“It’s moot anyway,” Keys said. “I can’t run experiments on an animal native to this system. We need animals that came from Old Earth and share mostly the same DNA as human beings.”

“Lab rats share mostly the same DNA as we do?” Mandrake asked.

“Makes you feel less special to learn that, doesn’t it?” Ankari asked him.

“Who told you that you were evolved, Mandrake?” Kor asked.

You can find out what happens next in Quashi in Embrace the Passion: Pets in Space 3. 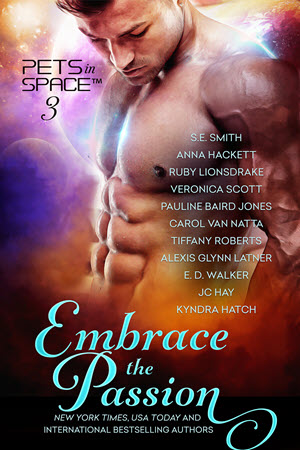 Proud supporters of Hero-Dogs.org, Pets in Space™ authors have donated over $4,400 in the past two years to help place specially trained dogs with veterans. 10% of all preorders and first month's profits go to this wonderful charity. Open your hearts and grab your limited release copy of Embrace the Romance: Pets in Space™ 3 today!