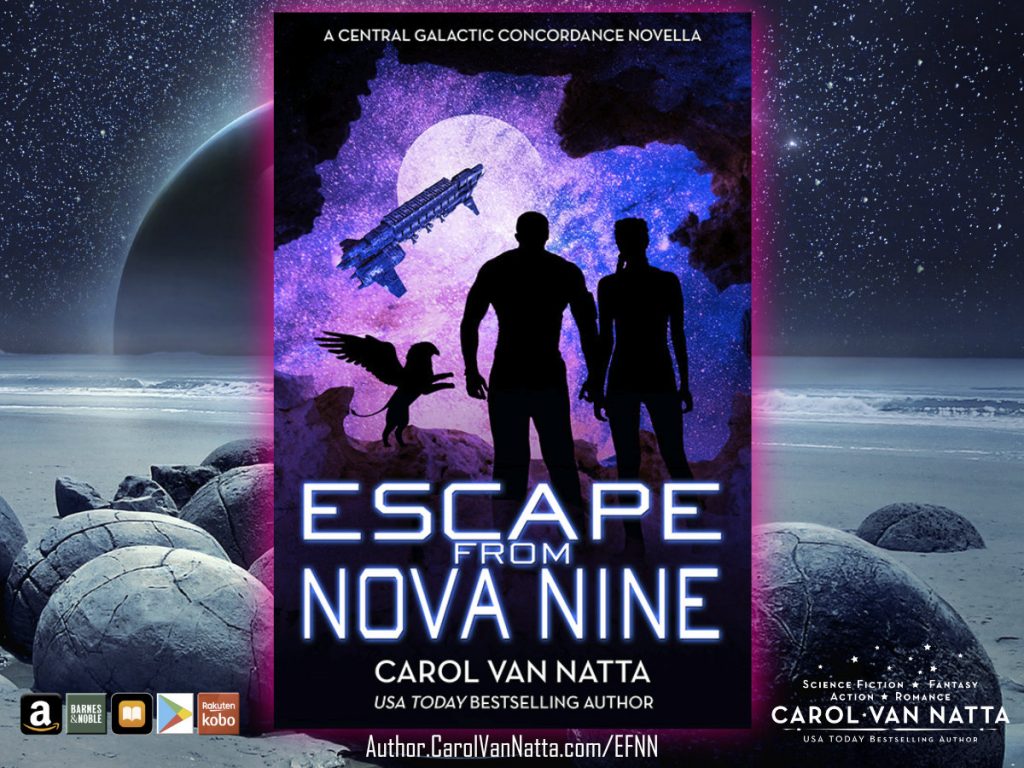 Writing novellas for the Pets in Space® anthologies and others gives me the chance to explore subjects that are usually in the background of my space opera series. Previous stories tackled the ethics-challenged designer pet business (Pet Trade), the futuristic prison industry (Cats of War), and the first responders (Galactic Search and Rescue). Escape from Nova Nine delves into the fabled and mysterious pirate clan.

Everyone in the 500+ settled planets of the Central Galactic Concordance has heard of the pirate clan. They got their name a hundred years before the founding of the CGC, owing to a falling out between a group of independent traders and the military at the time. The insulting name stuck. So did the military practice to blame them when bad things happened to interstellar ships with valuable cargo. It's no wonder the Volksstam, as they think of themselves, gave up land claims in favor of staying safe in enclaves formed with interstellar starships. Over time, clusters of connected vessels became the cityships. They're very well hidden, and more importantly, they move periodically to confuse their enemies.

The Volksstam speak a futuristic version of Dutch. This is because the largest founding families (“familiestams“) spoke Dutch as their primary language. They've pilfered a bunch of loanwords from other languages, too. Plus, all Volkstammers also learn Standard English, the official language of government and business in the CGC.

I know you'll be shocked to learn that in the far future, humans haven't given up their penchant for prejudice. In the CGC, the pirate clan is downright detested. Here's a brief excerpt from Escape from Nova Nine to show you. This is the first meeting between Julke, a pirate woman who's been imprisoned for nearly two years, and Zade, a newly captured prisoner, who is being added to a mining work crew.

Lhap Cho stepped aside and pointed toward the prisoner. “This is Lunaso 3006. He went through full orientation a couple of hours ago. We added him to your workgroup’s comms net.” The guard’s accent spoke of a Mandarin heritage.

Lhap Cho pointed to Julke. “Defayensdytr 1351 is your trainer.” He turned to give her a pointed look. “He’s all yours.”

Julke nodded once, hiding her dismay. The last thing she needed was to be stuck with a beschaafd noob from the Concordance’s part of the galaxy, and be held responsible for his actions. At best, their workgroup would take a quota hit and be forced to work extra to make up for it. At worst, he’d be a bumbling klojo who’d get her punished or get them all killed.

The other guard, Dajoya, stepped forward. “Line up for inspection.”

Lhap Cho shook his head. “We don’t have time–”

Dajoya overrode him with forceful volume. “Yes, we do. Shitting griffins got into the staff food storeroom again. Warden wants them eradicated.”

Lhap Cho waved an arm dismissively. “Have at it, then.” He didn’t bother to hide his exasperation.

Julke waved to the noob. “Lunaso. Come stand next to me.” She edged left to give him room.

He glanced briefly at the guards, then walked to where she pointed to her right. He was taller than she’d thought, and wide-shouldered. At least he seemed comfortable moving in an exosuit.

Lantham and Sutrio moved to stand next to the noob.

Dajoya climbed up to look inside the hopper control cab and poke around in the tool compartment. She jumped down, generating a cloud of dust as her heavy gravity boots landed.

Her expression became more irritable as she waved the dust away and glared at Julke. “You, pirate-clan puke. Turn up the mister.”

Julke blanked her expression as she crossed to the enviro unit and did as ordered. If they ran out of water before the end of the shift, Dajoya and Lhap Cho would be the ones bringing them another tank.

Dajoya climbed up and into the jig’s cab, then leaned out to try the handle of the jig’s toolbox. “Why won’t this open?”

Julke’s heart sank. The little griffin Moonlet had nowhere to hide if Dajoya got the door open.

Sutrio clasped her hands behind her back. “It’s jammed.”

Dajoya jumped down and pulled out one of her favorite energy weapons, a high-res beamer. “Then I’ll un-jam it.”

“No!” The word was out before Julke could censor herself.

“Stop!” Lhap Cho lunged at Dajoya to clamp his gloved hand tightly onto her arm. “Why are you always shooting shit?”

Dajoya pulled herself away from his grip, but re-holstered her beamer. “Touch me again and I’ll kill you.”

The heated menace in her tone didn’t seem to faze Lhap Cho. “Hit a pure chofi deposit with a beamer and you won’t have to because we’ll all be dead.”