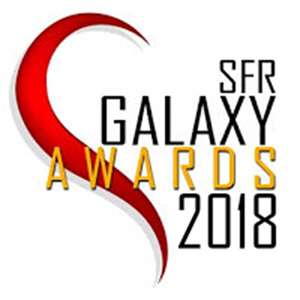 The SFR Galaxy Awards are unique. They are awarded by seven judges who select outstanding science fiction romance books published in a given year. Nominations are secret (just like the Nobel Prizes!), and the winners are announced at the end of January. The 2018 SFR Galaxy Awards represent the best of the genre for last year.

According to Laurie Green, one of the co-founders of the awards, “They aren't a voter's choice or a popularity contest. They are seven judges who are reviewers, bloggers, librarians, and/or editors. They select books that they feel are standouts in the genre, either overall or for certain aspects of the work. The purpose of the awards is to highlight outstanding SFR and to help readers find books they want to read.”

My space opera series has won three* SFR Galaxy Awards in years past, so I could be biased, but I think they're truly an honor. I can't think of another case where excellent reviewers and bloggers who love a particular genre have organized to create awards and give them out every year.

Oh, by the way, the limited edition Embrace the Passion: Pets in Space 3 anthology won awards from two of this year's judges. By the time you read this, that book will have left the known universe, but a little bird alien pet told me there will be a Pets in Space 4.

In the romance world, SFR often gets lumped into paranormal romance, as if magic and science are the same difference. In the science fiction world, if SFR is acknowledged at all, it usually ends up under space opera. At least space opera fans like people to have relationships while they fight space battles.  In my opinion, SFR is the best of both—you wouldn't have a story without both the romance and the science fiction, so it deserves its own genre—and seven years of awards.

This is the comprehensive list of the winners of the 2018 SFR Galaxy Awards. If you love science fiction romance as much as I do, consider this your one-stop reference for finding new authors to follow and new books to read (and one TV series to watch).

Winners of the 2018 SFR Galaxy Awards

Awards and quotes from judge Riley Moreland, Whiskey With My Books