Ice Age megafauna are the core inspiration for my Ice Age Shifters® paranormal romance series. I've mentioned before about how reading an article on excavating the fossil remains of a huge prehistoric bear in South America sparked my muse. What if rare and special shifters were throwbacks to the age of really big mammals adapted to the bitter cold of the global Ice Age? Which meant I got to read all about prehistoric bears (Arctotherium). Research is one of the fun parts of my author life.

During the most recent global ice age, mammals got big. Not dinosaur big, but giant by today's standards. Giant herbivores with giant predators to match. Examples include mammoths, mastadons, felines, canines, sloths, and bears, which are all iconic fauna of the Pleistocene era.

The Ice Age extended to the whole planet, which includes Central and South America. There, the fossil remains of prehistoric bears are less plentiful. Well, let me rephrase that. Humans haven't found as many. North America has three or four well-known predator traps. One example is the La Brea tar pits that enticed predators with the scents of dying prey, then trapped the predators, and preserved the bones for humans to find. Venezuela in South America has an intriguing tar pit, too, but not as much funding available to excavate it or turn it into a museum.

What we do know about Arctotherium bears, based on the fossil record, is that they were big, and that they thrived during the Ice Age, but not after. All we can do is make educated guesses about why they species failed.

In North America, the ancestors of today's bears were half again as big as grizzly and polar bears, the largest of the modern Ursa family. The prehistoric kind were called “short-faced” because the bones we've found suggest their snouts were shorter and wider than the shapes we're familiar with. For Arctotherium, their bone and skull structure suggest they were omnivores, but it's hard to guess muscle shape and weight based on a few incomplete skeletons.

About the Prehistoric Bears in Ice Age Shifters

Luckily for me, that gives me a fair amount of room for artistic license in creating Trevor Hammond, the Ice Age shifter in Shifter Mate Magic, the first book in the Ice Age Shifters series. Trevor's bear weighs more than 3,000 pounds (1,500 kg), putting him at the curb weight of a small SUV. I decided he'd be shaggy with thick, insulating fur and have long claws for digging in the ice. I also gave him the color pattern reminiscent of a spectacled bear, which is the modern descendant bear species in South America.

In my series, Ice Age shifters are rare and a not-always-welcome variation in the packs, prides, or clans they are born into. In the hidden magical community, elves believe Ice Age shifters are a gift from the gods to help in times of extraordinary need. Which means these special shifters can expect to be involved in adventure and intrigue, as well as finding a mate who can love them for who and what they are.

A lonely bear shifter must convince a woman on the run that he's her mate, and their only hope is a magical sanctuary town. Pregnant Jackie just escaped from a corrupt feline pack intent on selling her half-shifter baby to the highest bidder. When prehistoric bear shifter Trevor meets Jackie at a truck stop, his bear demands he help her. Jackie thinks he's sexy as hell but doesn't trust shifters. With the feline pride hot on her trail, however, Trevor and the quirky Wyoming town might be her only chance for survival. Even his indomitable bear may be no match for a dangerous enemy seeking retribution.
Discover the secret world of magic and true mates in Shifter Mate Magic, the first book in USA TODAY bestselling author Carol Van Natta's fun, action-filled, steamy-hot Ice Age Shifters® series.
CHECK OUT SHIFTER MATE MAGIC 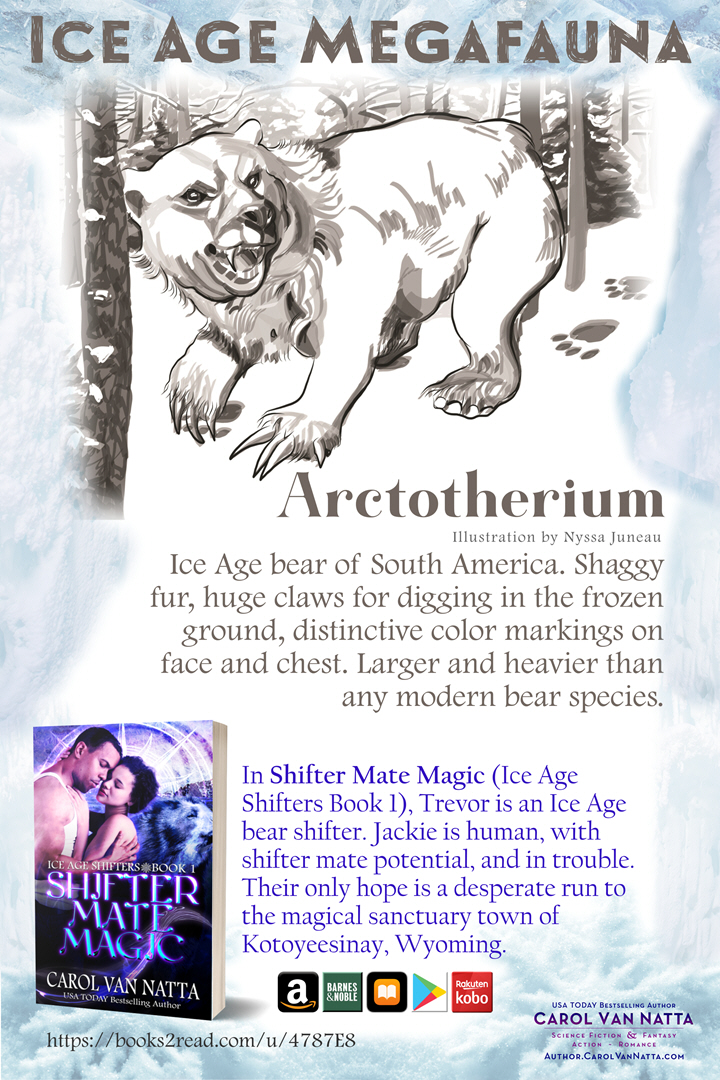