Cosplay for My Cat, or, Authors Are Daft

To promote Embrace the Romance: Pets in Space 2, I decided to come up with a cosplay for my cat. This is a cautionary tale for those of you planning similar endeavors.

In my novella, “Pet Trade,” one of the twelve stories in the Pets in Space 2 anthology, both of the main characters end up with a variety of unusual pets. In Axur Tragon's case, they came with the ship he stole. In Bethnee Bakonin's case, she's a veterinarian with a soft spot for the animals she cares for.

Because I'm a daft author, I became inspired to have my cat cosplay one of Axur's more unusual pets, as a way to promote the book. Should you ever, for some insanely optimistic and naïve reason, decide to dress up your cat as a stegosaurus, take some pointers from me.

1. Not all cats will wear costumes. The Diplomat Cat, the solid gray, talkative cat on the left in the photo below, can be cajoled into anything, as long as he thinks it's a game. Henrius, the ginger-colored striped cat on the right, is sure that it is only his superior ability to run and hide that keeps monsters from gnawing his legs off. Not even the adventurous Diplomat, however, will wear anything on his head, and I'd have to drug him to get him to ride a Roomba.

2. Not all costumes fit all cats. Measure your cat's neck, chest, and belly before buying that cute little costume intended for a chihuahuas. Pro tip: Unless your cat is comatose, resign yourself to an exciting game of Bite the Measuring Tape, and possibly a bonus round of Buy a New Measuring Tape, Because the Cat Ate the End Off This One. 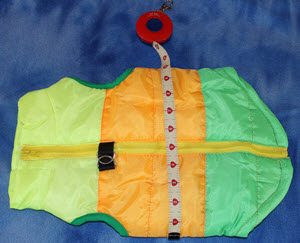 3. My sewing skills are hit and miss, so I decided to buy a costume and embellish it. You might be more clever and crafty than I, and could make your own out of fabric remnants. In any case, I recommend getting your cat accustomed to wearing the base costume more than once, and possibly in a room where the cat can't hide under the bed and attempt to chew off pieces of it. Which reminds me, maybe you want to have an extra costume on hand, in case your cat takes violent, destructive exception to the first one.

4. Unless you have all frickin' day to chase your cat around the house, hoping to catch him in a suitably cute pose, I recommend enlisting someone else to operate the camera. You'll still have to chase the cat around the house, but at least you won't tire yourself out carrying the camera, too, or forget where you set the lens cap down, and spend the next week looking for it. Not that it happened to me, or anything. 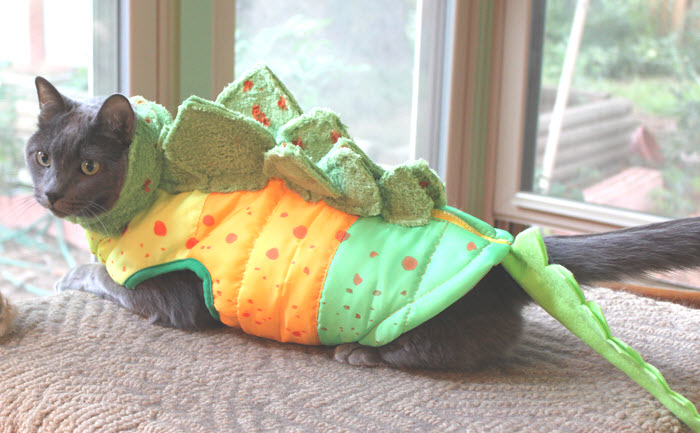 In my story, “Pet Trade,” the main characters, Bethnee and Axur, are smart and sane people, and don't dress up their pets. Here’s a short excerpt from “Pet Trade,” where Bethnee meets Axur’s pets for the first time and tells him something about them.

“Your foo dog, Shiza, is legal, probably stolen. They’re designed to look like little curly-haired lions from pre-flight Chinese legends, but underneath, they’re mostly dog, so you can feed him whatever you feed Trouble. Don’t let Shiza bite you out of anger or fear. Foo dogs are designed to protect children, and his teeth can inject a nasty toxin. I can use Nuñez’s lab to tailor vaccines for you and the others, as well as Nuñez and me, but it’ll take a ten-day or so.”

The big wolf sat on her haunches and rested her head on Bethnee’s shoulder. She stroked the wolf’s broad head. “Long day, huh?”

“No, I was talking to the dire wolf. Her life is in flux at the moment, and she’s in here with me, wanting affection and reassurance.”

Axur mumbled something in a language she didn’t recognize. Her minimal education hadn’t included anything but Standard English, and whatever rude words she could pick up on the streets. “What about the miniature dinosaur? I think it’s supposed to be a stegosaurus. Its name is Ankle Biter.”

She shook her head. “I don’t do reptiles, amphibians, or fish. Can’t feel them at all. Your reference manuals are your best bet. It might need to stay inside for the winter.”

“Can I ask how you know so much about the pet trade? You don’t seem like the type.”

Ordinarily, she zeroed personal questions, but he was trusting her with the animals he loved. More tellingly, they all cared for him and trusted him without reservation.

She considered what she wanted to say. Jumpers willingly volunteered to work for the Citizen Protection Service’s elite military force. The CPS hadn’t done nearly as well by her…

Read more in “Pet Trade,” one of twelve stories in the Embrace the Romance: Pets in Space 2 anthology:

All photographs in this post are copyright (c) 2017 Carol Van Natta.