Meet the Heroes of Escape from Nova Nine

Escape from Nova Nine (which debuts Pets in Space 6) is set in my Central Galactic Concordance space opera universe. It's a companion to the three other novellas* I've written for previous Pets in Space anthologies. And like them, this story is a shorter side-trip that parallels the big damn story arc, but isn't directly a part of it. New readers can easily enjoy the story as a standalone, and series fans might find an Easter egg or two. Please meet the heroes of Escape from Nova Nine.

Only 3 short weeks until Pets in Space!

Skills and Talent, On the Run Again

Zade Lunaso is a jack-of-all-trades-master-of-none spacer. An orphan who was raised in group homes, he ran away to space as soon as he was old enough. He would have joined the Central Galactic Concordance (CGC) military, except he's a minder. Even though he's only a low-level empath, able to sense the emotions of others, the CGC Space Division would have immediately transferred him to the Citizen Protection Service. That sprawling agency has too many fingers in too many pies for Zade's comfort.

He started out working for independent traders, but prejudice against minders made it hard to get hired. These days, he works for jackers, the scavengers of the space lanes. After twenty-plus years of knocking around the galaxy, he's learned how to do every ship job there is, from janitor to pilot and everything in between. What he hasn't learned is how to pick a good crew to work for, and he avoids conflict like the plague. Consequently, he often finds himself looking for a new job in a hurry. Which is how he ends up on Nova Nine.

Secrets Galore, Running Out of Time 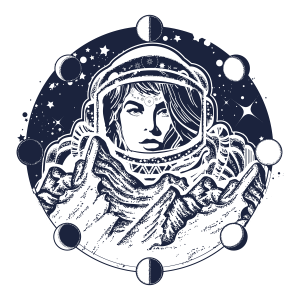 Julke Defayensdytr is one of the fabled pirate clan. Though they call themselves the Volksstam, they're known to the civilized planets and the CGC military as the scourge of the galaxy. As you might imagine, reality is much more complicated. However, the thing that scares the military more than anything is that most Volksstam are minders.

A victim of betrayal, Julke has been stuck on Nova Nine for nearly 500 days. Nova Nine is dark relic of the past, an asteroid mine meant as a one-way trip for political prisoners. The current mine owners aren't so choosy; they'll take anyone they can catch who won't be missed. The extraction work is brutal and often fatal. Julke is one of the longest-serving prisoners in the mine. She has information her people desperately need, but she's a trade representative, not a warrior. Rescue seems hopeless.

When she's given new prisoner Zade to train, she's not exactly impressed.

Lhap Cho stepped aside and pointed toward the prisoner. “This is Lunaso 3006. He went through full orientation a couple of hours ago. We added him to your workgroup’s comms net.” The guard’s accent spoke of a Mandarin heritage.

Lhap Cho pointed to Julke. “Defayensdytr 1351 is your trainer.” He turned to give her a pointed look. “He’s all yours.”

Julke nodded, hiding her dismay. The last thing she needed was to be stuck with a beschaafd noob from the Concordance’s part of the galaxy, and be held responsible for his actions. At best, their workgroup would take a quota hit and be forced to work extra to make up for it. At worst, he’d be a bumbling klojo who’d get her punished or get them all killed.

Fortunately, they both have hidden depths and resources. Not to mention aid from the mysterious space griffins that populate the asteroid. If they can learn to trust each other, they just might pull off the impossible: escape from Nova Nine.

* Pet Trade, Cats of War, and Galactic Search and Rescue

Meet All the Heroes in Pets in Space 6

Join the incredible authors in this year's Pets in Space 6 for another out-of-this-world adventure. This award-winning, USA TODAY Bestselling anthology is packed full of your favorite Pets in Space®. Featuring 11 original, never-before-released stories from some of today's bestselling science fiction romance and fantasy authors, Pets in Space 6 continues their vital support of Hero-Dogs.org, the non-profit charity that improves quality of life for veterans of the U.S. military and first-responders with disabilities. Don't miss out on this limited-edition anthology before it's too late!