Since the book is on sale for 99¢ for the holidays, I thought I'd share a little snippet from Overload Flux, the first book in my space opera, adventure, and romance series.

In this scene, Mairwen Morganthur, a security guard with a lot of secrets, is serving as the temporary personal assistant to Luka Foxe, a brilliant forensic investigator. They're on their way to visit a potential witness who might be the key to uncovering who is behind stealing the vaccine for a pandemic. She's seen him in action at a previous crime scene, and knows they bother him in unexpected ways. This time, instead of a witness, Mairwen discovers the body of a torture victim.

I like this scene because it shows both the damage that Luka's extraordinary talent is doing, and that Mairwen is starting to care what happens to him, despite her determination to stay hidden and unnoticed.

He closed his eyes a moment and muttered a curse. He took a deep breath and looked at her. “I have to see.”

She let him go in, then closed the apartment door behind them and stepped aside, her eyes on Foxe.

He held himself rigidly still, as if fighting something, but soon the despairing, haunted look she’d seen before started creeping into his expression. After first examining the floor in front of him, he took one careful step closer. He crouched down, maybe to get a better angle to examine the woman’s body, then swept his gaze side to side. He lingered over several spots, angling his head at a couple of them, but his gaze drifted back to the body and stalled. He stared as if mesmerized.

Mairwen waited quietly for a minute, watching him closely. He wasn’t moving any more, but his breathing was shallow, and she could hear his heartbeat racing. The haunted look had completely overtaken his features. After another minute, she gave into the growing conviction that she needed to do something.

She said his name again, but he still didn’t react. She crouched down in front of him. His eyes were dilated, and tears were streaming down his face. Possibly it was like the old, bad memories, but it reminded her more of a tracker’s sensory overload trance, the first step on the road to oblivion. Not knowing what else to do, she gave his shoulder a slight push. He felt stiff.

She took off her glove and put her fingertips on his wet cheek. He didn’t react.

She narrowed her focus to just him and flattened her palm on the side of his face. “Foxe… Luka, look at me.” She willed him to respond.

Nothing. His skin felt surprisingly cool against her hand. Just as she was wondering if she should maybe ping someone for help, she saw a slow change in his expression. His lost look faded and his focus gelled on her, and his eyes met hers. His full regard rocked her.

“Mairwen,” he said, as if he was deeply amazed and relieved to see her.

When she would have dropped her hand, he caught it with his own and leaned his face into her palm. “Bíddu. Wait. Give me a moment.” 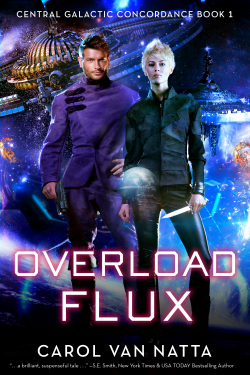 Two loners fighting to stay alive discover they must now save the galaxy.

The only vaccine for a deadly galaxy-wide pandemic is missing … and the only ones who may be able to find it are a powerful talent on the verge of a meltdown, and a security specialist hiding her extraordinary skills in a menial job.

Brilliant investigator Luka Foxe must act fast if he's going to save the civilized planets of the Central Galactic Concordance. For as a pandemic sweeps across the galaxy, someone is stealing the vaccine. To make matters worse, Luka's hidden mental talents are out of control, leaving him barely able to function in the midst of violence and a rising body count. The convoluted trail leads to a corrupt pharma industry and the possibility of an illegal, planet-sized laboratory. In the face of increasing threats, he must rely on an enigmatic, lethal woman who has secrets of her own.

Mairwen Morganthur hides extraordinary skills under the guise of a dull night-shift guard. The last thing she wants is to provide personal security for a nova-hot investigator, or to be plunged into a murky case involving sabotage, treachery, and the military covert operations division that would love to discover she's still alive. Worse, she knows that two more deaths won't bother their enemies one bit. Their only hope for survival is to share their darkest secrets. With everything in their universe at stake, can they learn to trust one another?

Don't miss this thrill-ride through a futuristic galaxy—get your copy of Overload Flux today!