Things I Learned at Whimsy Con

Whimsy Con in Denver was a delight. It’s the second year for the convention, which is an inheritor of the equally delightful but no-longer extant Anomaly Con. These are some things I learned at Whimsy Con.

It’s All About the Corset

It’s billed as a steampunk and costuming convention, meaning there were some amazing outfits on display. 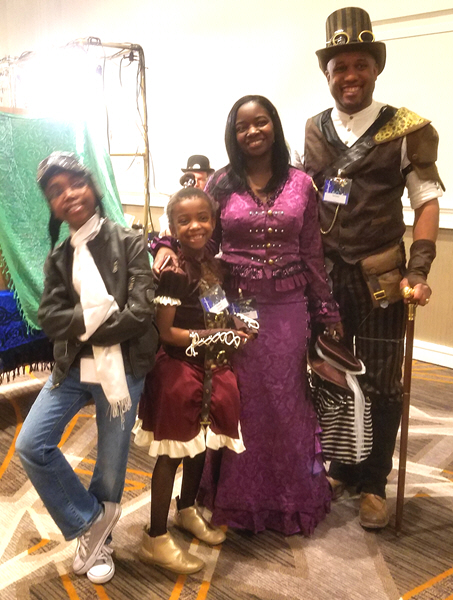 I love this family. I especially laud them for getting a fidgety preteen boy to go along with them.

Steampunk pirate — look at those boots!

If you can't have a corset, bring shiny steampunk guns.

I have worn corsets for hours and hours. Believe me, it’s not as easy as it looks. There is no slouching in corsets, unless you like having your armpits gouged. But nothing says steampunk like a corset… and weapons.

This is my table-sharer, Richard Friesen. He writes epic fantasy and a humorous superhero series (the hero’s superpower is falling asleep). Richard was lucky enough to get stunning artwork for his fantasy series covers from the fabulously talented and genuinely nice fellow Chaz Kemp. 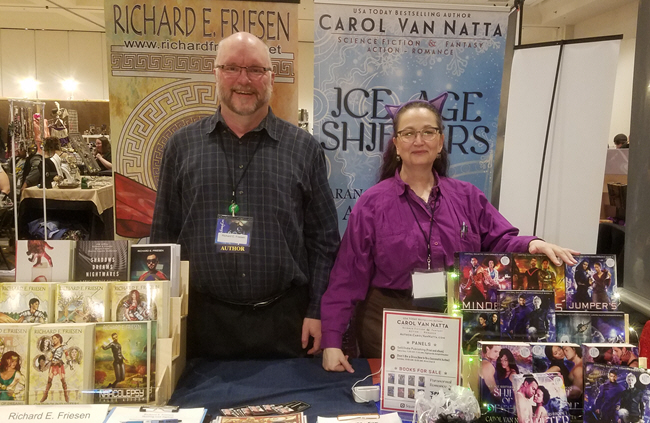 Richard Friesen and Carol Van Natta at Whimsy Con 2019. Won’t you buy books from us? We need money for Girl Scout cookies.
More things I learned at Whimsy Con: When posing for pictures, turn your badge around and make sure your ears aren't crooked.

I reconnected with friends (shout out to author and professor Trai Cartwright), authors Stant Litore of Zombie Bible fame, and Owen Wears, and vendor Jessica at Wings, Charms & Things (she custom-made wings for my cat). I met new author friends on panels about the indie publishing business and how to play well with others.

I am weak. I succumbed to one of my addictions and bought a new cat. 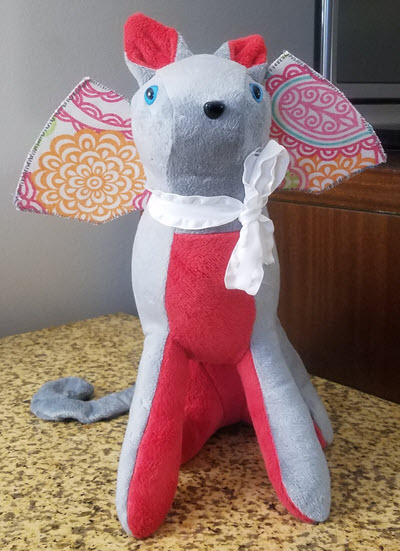 Whimsy, the Winged Cat, who will be having more adventures in the near future.
Whimsy was born at Whimsical Whiskers.

The novella I wrote for last year’s Pets in Space anthology was called Cats of War, and featured (did you guess?) winged cats. They were named Novo and Boz, so if I ever write a followup story of the further adventures of winged cats of war, one of their offspring will be named Whimsy.

Other people had pets, too. 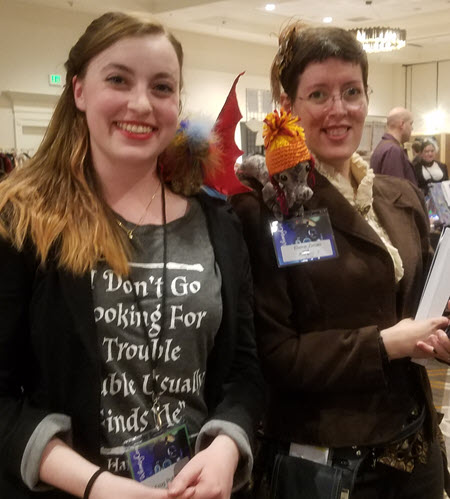 My cats aren't as cooperative about shoulder sitting.

Bonus: Here's a short video of the shoulder dragon, who moves when it is so inclined.