I'm a very lucky author. When I'm working on a book deadline (which is pretty much any day ending in ‘Y'), the resident mad scientist does most of the cooking in our secret lair… er, house. However, I occasionally borrow his laboratory… er, kitchen for special occasions such as potlucks and family celebrations. I've perfected a few dishes over the years, and people ask how to make them. So, here are three go-to recipes for gatherings.

Only one of the main characters in any of my books is a notable cook: Jerzi Adams, in my space opera series. He appears in Overload Flux and is a main character in Pico's Crush, and has a well-deserved reputation for culinary skill. Cooking was his way of surviving before he joined the military. Since then, it's become his way of showing his love and appreciation for friends and family.

Elegant side dish that works well on a buffet or a potluck table because it tastes good at room temperature as well as fresh from the oven. 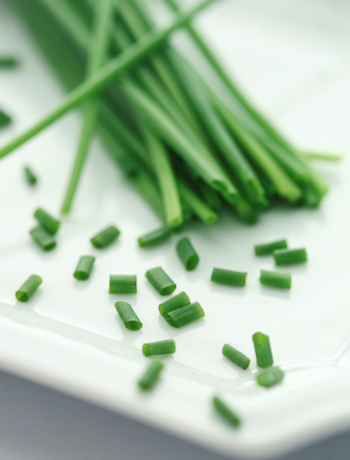 Chop half the thawed corn coarsely using a food processor or an immersion blender. Combine the chopped and whole corn in a large bowl and sprinkle with sugar and salt, stirring to combine well.

In a medium bowl, combine eggs, milk, vanilla, butter, flour, and spices. Stir into corn mixture. Add the chives and mix well. Pour into the prepared baking dish. The chives will float to the top, and there's nothing you can do about it. Sprinkle the top with nutmeg.

Bake until just set, about 1 hour. Garnish with more chives if you have any left over. Let cool for 10 minutes before serving. Alternatively, serve at room temperature.

Heat any leftovers in the microwave or in the oven. It doesn't freeze well, but it's easy to make more.

*If you don't have any fresh chives, I recommend substituting 2-3 teaspoons of onion powder or shallot instead of using the dried chives from a bottle, which tend to taste mostly like lawn grass. And as much as I love garlic, it overwhelms the delicate flavors in this dish.

In my Ice Age Shifters® paranormal romance series, most shifters have acute senses even when in human form. I figure that makes them extra picky or extra appreciative when it comes to foods and spices. For example, I detest the flavor of anise (I don't like licorice, either). If I had superior shifter sense of taste, I probably couldn't even be in the same kitchen with it. But I adore cardamom, so I'd try it in anything vaguely dessert-like. Which is why cardamom ended up in my go-to recipe for cranberries. 😎 In Shifter's Storm, the hero has too-acute senses, even for a shifter, which makes eating a challenge until he figures out how to deal with it.

Tart and tasty with a spice melange to liven them up. It's easy to double the recipe for serving a crowd or taking to a potluck. I often have a bag or two of cranberries in my freezer for a sunny day. 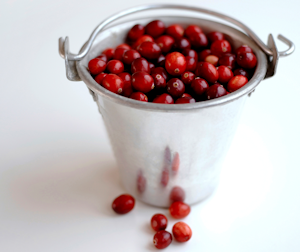 Pour the water into a medium covered saucepan and stir in the sugar. Bring to a boil over medium heat. Measure and add the spices to the sugar water as it's heating. Feel free to adjust the ratios of the spices to your superior sense of taste. You could also add 1 tablespoon of Amaretto (or 1½ tsp. almond extract) and a 1/4 teaspoon of pepper if you're feeling adventurous.

When the water is boiling, add the entire bag of whole cranberries. They'll float for a bit, so stir them around carefully. Once the water is boiling again, reduce the heat a bit and simmer for 5-6 minutes, stirring occasionally. Reduce the heat to medium-low, cover the saucepan, and simmer for 5 to 10 minutes more. Feel free to add a bit if water if the sauce is too syrupy, or leave the lid off for a few minutes more to boil off some of the liquid.

Keeps nicely for up to 7 days in the refrigerator. I've never have enough leftovers to find out if they freeze well.

*If you don't have orange powder, feel free to substitute 1-2 teaspoons of orange extract, 1 tablespoon of orange liqueur, or a few large strips of orange zest. Fish out the orange strips before serving.

Some of the fun of being and author is making up places where I'd like to go. My paranormal romance Shift of Destiny features the Fairy Diner, which caters to the special dietary needs of its patrons. It's located in the magical sanctuary town of Kotoyeesinay, Wyoming. The chef is an actual wizard in the kitchen. She can make literal stone soup for a hungry golem, or a carnivore's delight pizza for a man with a prehistoric feline's love of meat. If I lived in Kotoyeesinay, I'd probably eat at the Fairy Diner every week.

Light and not too sweet. The crust instructions below take about an hour, but the resulting crust stands up to the filling's moisture for several days before getting soggy. Feel free to substitute your preferred method. 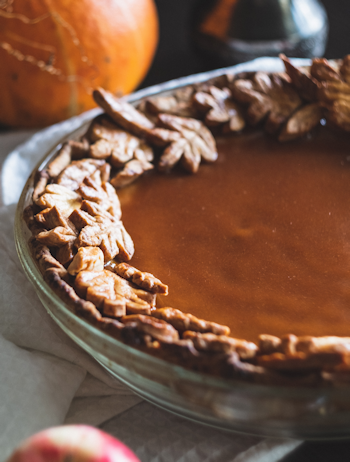 Option 1: Use a frozen preformed deep-dish shell. Let it thaw about 15 minutes. Line the crust with foil and fill with dried beans or pie weights. Bake until sides are just about set, around 15 minutes. Remove foil and weights. Use a fork to pierce the pie crust in several places, especially the bottom inner corner rim. Beat or whisk the separated egg white to break it up. Brush it all over the crust, especially the bottom and the top edge. (Reserve any leftover egg white for the pumpkin filling.)  Bake until the crust is pale golden, about 12 minutes. Transfer it to a rack and let it cool. Leave the oven on.

Option 2: Use a refrigerated pie crust or your own recipe to make a 9″ crust. Roll it out to about 14″. Transfer it to a 9″ pie dish. Trim the overhang to about 1/2″ and fold the edge under. Crimp decoratively, forming a high-standing rim. Place the crust in the freezer for 15 minutes. Follow the instructions for Option 1 for lining the crust, baking it, brushing with egg white, baking again, and letting it cool. Leave the oven on.

In a large bowl or a stand mixer, mix the pumpkin, sour cream, whipping cream or half & half, brown sugar, eggs (including leftover egg white), the spices, and the liquid flavorings. Whisk until well blended. Pour the mixture into the cooled pie shell.

Bake at 350ºF for about 55 minutes, until the center is almost set. Transfer to a rack to cool completely. Serve with whipped cream if you're feeling extra frisky.

Can be made 1 day ahead; refrigerate the covered pie until ready to serve. Can also be made as pumpkin custard without the crust at all — pour the filling into custard cups and bake them for 50 minutes or so.

BONUS: One of my favorite television shows is Firefly. Interesting world, magical characters, and canceled far too soon. Now I can console myself with Firefly – The Big Damn Cookbook. Fun recipes for gatherings or serving to the hungry crew of your starship. 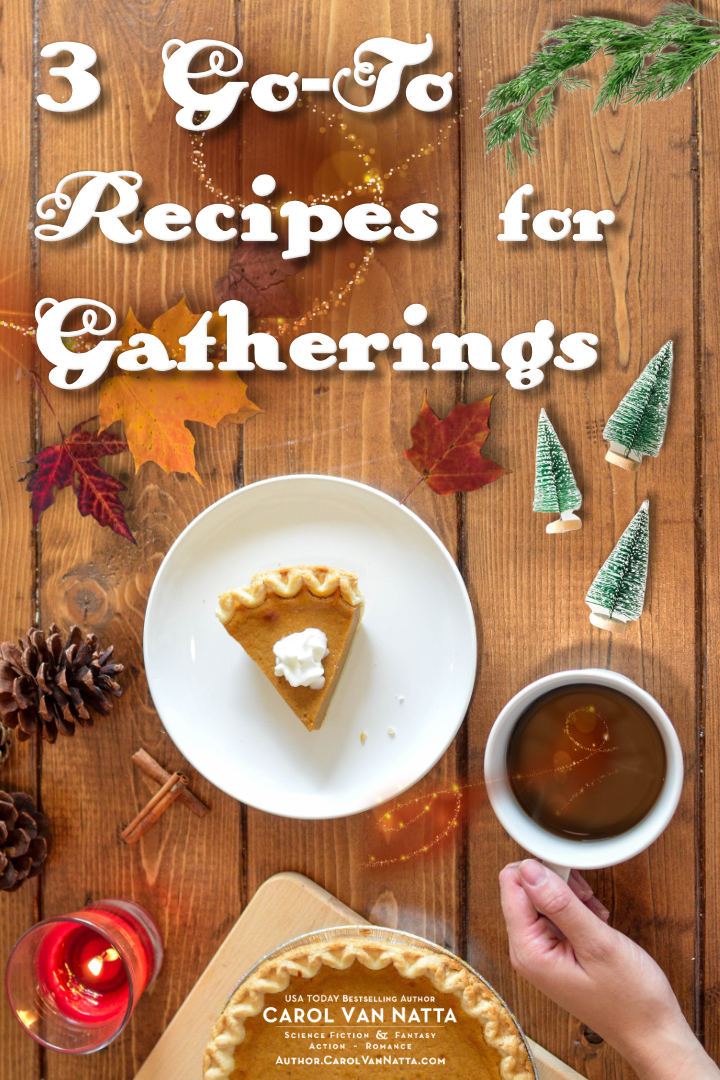