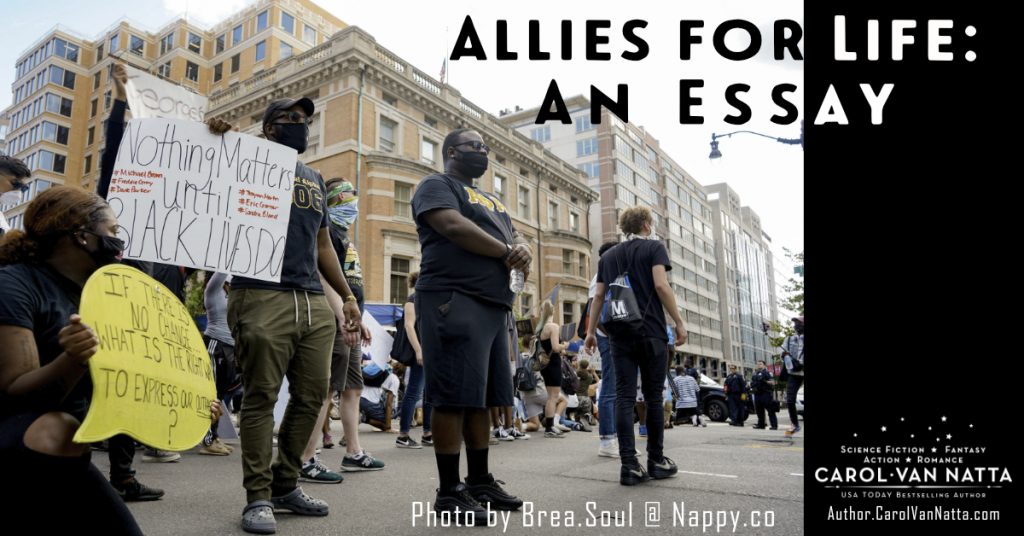 Most of my blog posts talk about my books, or the thrilling life of an author, and occasionally cats. This is one of two personal essays on topics related to current events. The other talks about friends for life. This essay is in response to the casual, callous murder of a Black man by a white police officer, and the aftermath. It's not the first to be caught on tape, it's just the latest. Anyone surprised by the ensuing protests and occasional riots hasn't been paying attention. Which is part of the problem. We can't be bystanders any more. We must be allies for life.

Systemic Racism and Allies for Life

I have the amazing and completely unearned good fortune to be born white and middle class. I have a job, food on the table, and a house to share with cats. But I was raised by a racist.

My mother grew up in rural Texas, a child of the Great Depression. Though her parents later made money, she inherited their impulse to save everything that wasn't broken and their habitual racism. Only whites had important jobs or embraced the virtue of cleanliness. Only whites benefited from education. Nice things should be for white people who value them. My mother's generation soaked up those attitudes like a sponge.

The 1960s changed everything for my mother. Away from her parents and away from the South, she made friends with Blacks, Hispanics, Jews, and Asians. Women's liberation and Black Power movements opened her eyes to realities of what non-whites experienced. She made a conscious, sometimes difficult, but very determined effort to raise her children differently. When I was old enough to understand, we talked about it often. She said that deep in the marrow of her bones, she was still a racist. That she still had to fight her knee-jerk, lizard-brain reactions in certain situations, and still had to value-check her assumptions.

Under no circumstances was she going to pass on her racism to her children. See the sentence above about my unearned good fortune.

The Privilege of Skin Color

I'm not color blind—I notice color because I love diversity. I love hearing people's personal experiences and seeing the world through their eyes. It's very likely why all my fiction stories start with characters, as I've mentioned before. People spark my imagination.

However, I didn't escape the other half of racism, the blinders of white privilege. Clueless would be a good word for me. So would, I'm sad to say, oppressive. If you've got a free 18 minutes, please listen to Peggy McIntosh's TED Talk from 2012 to see why I say that. My conceit and obliviousness to the daily micro-aggressions experienced by my non-white friends and coworkers meant I was a rock. Benign at best, another obstacle at worst. White privilege, therefore, is my conscious value check.

Do the police have a hard job? Hell, yes. I couldn't do it, and I respect those who can do it right and well.

But were they raised in the same culture of white privilege I was? Hell, yes.

Their mission is to protect and serve the people. Nothing in that statement mentions skin color, sexual orientation, gender, physical ability, income, neighborhood, clothing, accent, or any other distinguishing feature of those people. They've slid into the comforting, violent patterns of the past, and we who have the get-out-of-jail-free cards have let them.

That has to change now. Lives depend on it.

I'm an Ally in the Black Lives Matter Cause

Black lives matter. They must matter as much as the rest of us who are still wearing blinders, or none of our lives matter.

I no longer listen to people who counter with “all lives matter,” or “blue lives matter,” or some equally provoking response. Those arguments are rarely sincere. Instead, they're meant to deny, diminish, and distract. If a house is on fire, telling the firefighters that all houses matter isn't helping.

Humans thrive on working together for not just the common good, but the specific good. My family and friends are every color, every gender, every walk of life, and more. Therefore, I plan to use my luck and my resources to dismantle white privilege and transform it into human privilege.

I will continue to advocate for authors of color and multicultural characters. I will call out injustice, and take advantage of the hall pass my skin color gives me to make a commotion. I want to be more than just a benign rock, I want to be an ally for life.

One last point. Anyone who has read my books will not be surprised by my politics. I won't sit down, shut up, and stick to being entertaining. Silence is complicity, and that's not what allies do.