Hurricane Recovery for Puerto Rico and Its Islands 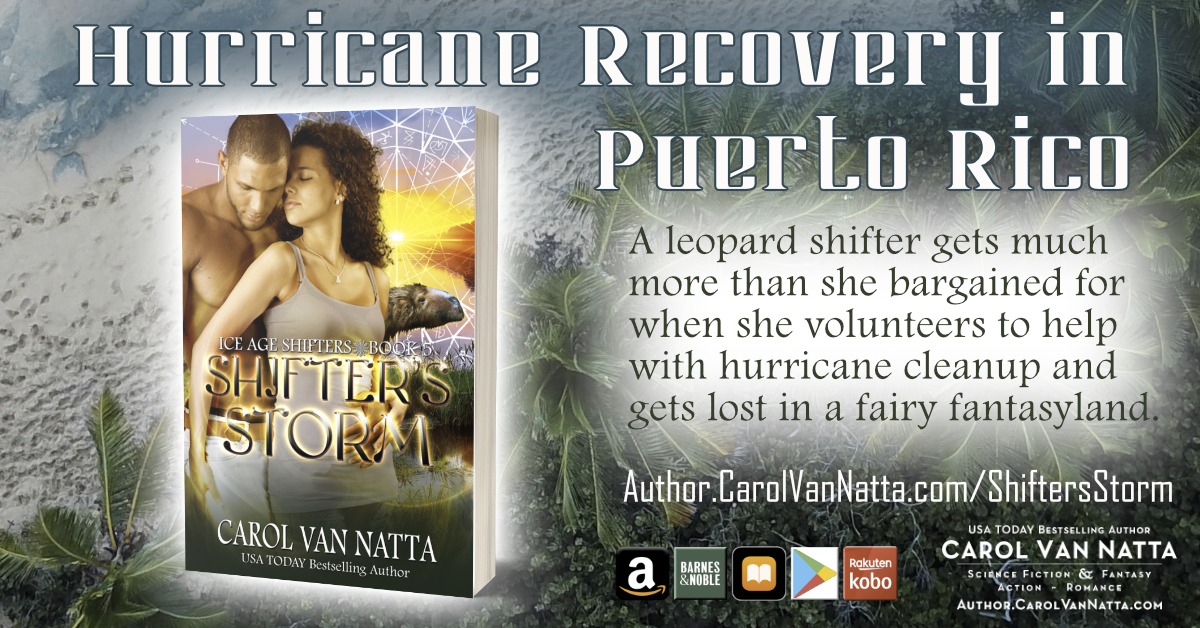 My latest paranormal romance, Shifter's Storm (Ice Age Shifters Book 5), takes place on the island of Vieques, part of Puerto Rico. I took my inspiration from the news reports about the tremendous damage done by 2017's Hurricane Maria. Hurricane recovery for Puerto Rico has been abominably slow (see my soapbox rant, below).

To be fair, recovery is harder because of the usual logistical challenges for islands, such as transportation issues and infrastructure limitations. For example, you can't just borrow extra electrical grid capacity from a neighboring state. Or send a truckload of emergency response electrical workers to restore power after an earthquake.

History of Vieques Island, and a Different Kind of Recovery 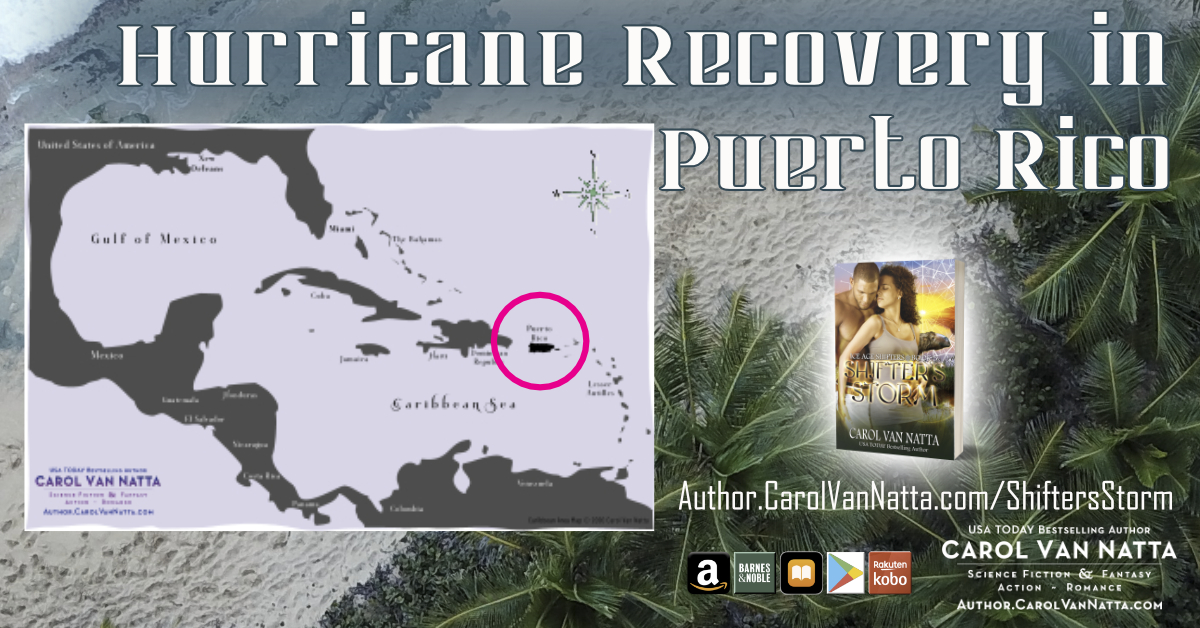 In the real world, Vieques got scrubbed by Hurricane Maria as much as the main island did. Vieques is about 8 miles (13 km) east of the much larger island of Puerto Rico, and has been inhabited by humans for three thousand years. Vieques has a tumultuous history of abuse, both from nature and humans. Unluckily for the natives, European explorers (and exploiters) found them easy to conquer and enslave. A couple of centuries later, Black immigrants (some slaves, some free) worked the sugar plantations. In the 1940s, the U.S. Navy bought more than half the island, throwing most of the population out of work.

The Navy chose to use Vieques for decades of artillery practice and bomb tests. They finally agreed to stop the practice in 2003, only after a native was accidentally killed, the local cancer rate was much higher than average, and years of protests. They withdrew, and much of their land became a U.S. Fish and Wildlife Refuge.

Shifters to the Rescue for Hurricane Recovery

In the Ice Age Shifters universe, magical creatures only agree on one thing: Never, ever reveal the existence of the hidden magical world to ordinary humans. While shifters and other mythical creatures are powerful, humans outnumber them considerably. So when the flamingo shifters in Shifter's Storm decide to help Puerto Rico with hurricane recovery after “Hurricane Chantal,” they must do so quietly. They choose to start the island of Vieques because they have friends and family who live there.

They're also smart enough to enlist professional help in the person of Chantal Hammond. She's a leopard shifter, but more importantly, she's a deputy sheriff with search and rescue experience. She's on loan to the tiny town of Barron, where the flamingos live. See this excerpt for their sales pitch in recruiting Chantal for their recovery effort. They're not above pointing out that the mythical hurricane in the book and Chantal share the same name, if it helps seal the deal. 😸

📢 Soapbox: Disaster Recovery Is Not A Privilege, It's A Right 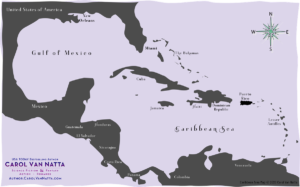 In my opinion, the U.S. government has a lot to answer for. Contrary to the opinion of certain politicians and pundits, Puerto Rico is part of the United States of America. Puerto Rico's population of 3.5 million people are full U.S. citizens. The same goes for the U.S. Virgin Islands, which were similarly damaged by recent hurricanes.

Sadly, it's apparently far too easy to forget this. If federal and state governments had ignored Florida or Louisiana cleanup for even six months, the courts would be clogged with lawsuits and elected officials would have been soundly defeated in the next election. Fun fact: Mississippi only has 2.9 million residents and got money for Hurricane Katrina right away. Funny how huge portions of funds appropriated for hurricane recovery for Puerto Rico were withheld by federal agencies for 2+ years. We thrive as a civilization when we work together to weather the storms life throws at us.

I'm putting my money where my mouth is and donating a percentage of the sales of Shifter's Storm to hurricane recovery (and now earthquake recovery) efforts in Puerto Rico. If you're so inclined, I invite you to do the same. 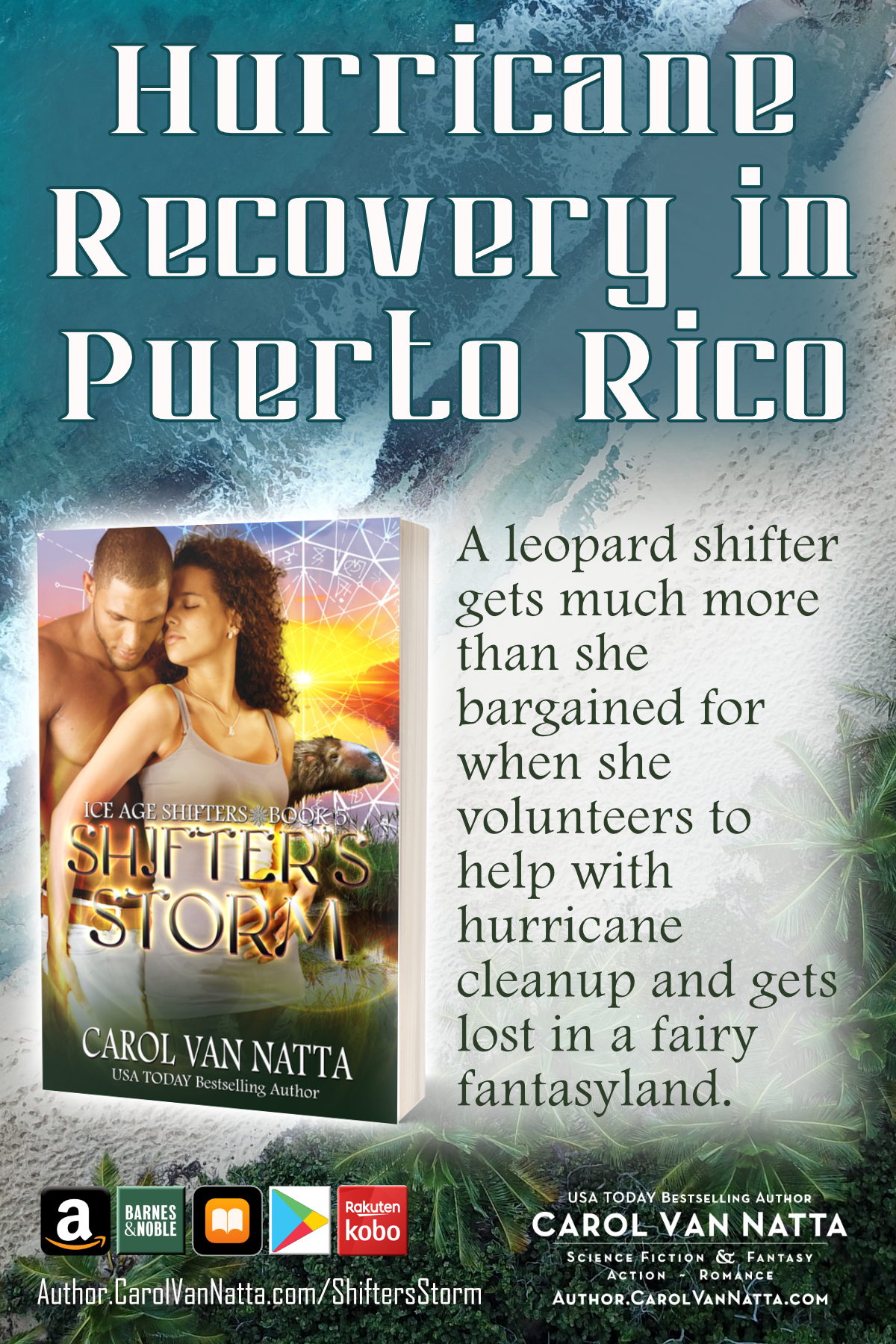