Inventing History for IN GRAVES BELOW, a Paranormal Romance 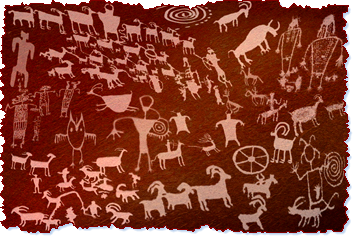 You may have learned in school that St. Augustine is the oldest living city in the U.S., founded by the Spanish conquistadors in the late 1560s. When the Spanish sent scouts out to explore the west, they ran into Native Americans who’d been there for thousands of years, with cities of their own. The Zuni Pueblo, which is still alive and well, was built 1,000 years ago, which makes it considerably older. History, however, is written by the conquerors.

Consider that a prologue for a moment while I tell you about a Kindle Worlds project. Amazon created the Kindle Worlds platform to license works from established authors and invite others to essentially write fan fiction in that universe. Best-selling author S.E. Smith invited me and eight others to be a “seed authors” in the rollout of her Kindle Worlds project for her lighthearted Magic, New Mexico paranormal romance series. Even though I’ve never written a PNR, as it’s called in the romance industry, I happily joined Susan’s merry band. It’s not as much of a stretch as you might think to go from a sprawling space opera series to the invented world of magical creatures, because they both involve world building, and they both involve people having people feelings.

Now back to the prologue. Susan Smith’s mythical town of Magic is set in southern New Mexico. The premise is that, in the 1700s, some magical people in the world set up a haven for themselves in the New World, protected it with magic, and invited other magical people to come live where “abnormal is the norm.” After enjoying Susan’s books, my first thought was to wonder what the Native Americans of the day thought about all this, which led me to research (one of my favorite things to do) the history of the various tribes and cultural traditions in the area. I knew I was going to build a parallel world for my story, but I wanted to base it on the Zuni, Navajo, and the historical tribes of the Southwest, without appropriating their culture for my purposes. So, I invented history for In Graves Below.

In the real world, the Spanish used greed, ruthlessness, and superior firepower to enslave the agrarian-based peoples to supply food and work silver mines. In my parallel world, magical people in the native tribes created and magically protected their own settlement. They may have been protected from the Spanish, but they couldn’t protect themselves from disease and internal strife, so in my world, the magical land is as endangered as the languages.

My story, In Graves Below, is more good natured than this all sounds, because the Magic, New Mexico universe is cheerful and fun, but to me, the best humor is grounded in real-life problems. My lead male character may be the last of his kind, but he has to put up with his irascible grandfather’s meddling in his love life. The grounding in reality drives the grandfather to push Idrián to marry and single-handedly repopulate the tribe. As a result, poor Idrián has a lot more on his shoulders than just producing grandchildren.

In Graves Below is out 5 May 2016, and available for Amazon Kindle.

NOTE: Originally posted at The Writing Bug, the blog for writers at Northern Colorado Writers, on 4/30/2016. “Zuni, Navajo, and Inventing History”