One of the charms of writing for the upcoming Embrace the Romance: Pets in Space 2 anthology was the chance to invent a pet. I might have gone a little overboard in the pet department, but what can I say? I love pets.
Update: Pets In Space 2 is available for preorder at your favorite retailer! See below.

“Pet Trade,” my novella in the anthology, is set in the same universe as my space opera-adventure-romance series, but not part of the Big Damn Story Arc that's brewing. In the future, the pet-trade industry has a pleasant front, selling designer pets to the wealthy, but much shadier underpinnings. Laws protect humans from experimentation and worse, but animals are fair game, and there's nothing fair about it. In my series, the pet trade has been a background texture for the milieu in which my characters operate, so Pets in Space is the perfect place to explore it. 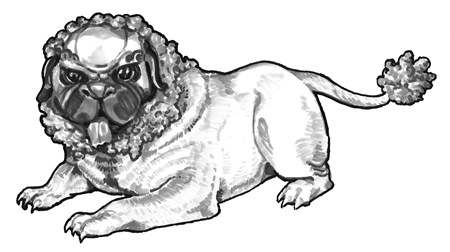 So, meet Shiza, the foo dog, as realized in illustration by the talented artist Nyssa Juneau. He's been created from a mix of animals to achieve his look, that of a miniature foo lion from ancient Chinese mythology, with a muscular body and a golden curly mane. He's impossibly cute, cuddly, and lazy, and he's a bit of a drooler with a wide, square mouth. But like so many things in life, he's a bit more than he seems. Here's a brief excerpt from “Pet Trade,” where pet-trade specialist Bethnee explains to ex-elite forces Jumper Axur about the animals he ended up with, specifically, Shiza.

“Your foo dog, Shiza, is legal, probably stolen. They’re designed to look like little curly-haired lions from pre-flight Chinese legends, but underneath, they’re mostly dog, so you can feed him whatever you feed Trouble. Don’t let Shiza bite you out of anger or fear. Foo dogs are designed to protect children, and his teeth can inject a nasty toxin. I can use Nuñez’s lab to tailor vaccines for you and the others, as well as Nuñez and me, but it’ll take a ten-day or so.”

Ten percent of the first month's profits of the sale of Pets in Space 2  go to a fantastic charity called Hero-Dogs.org. Their mission is to improve the quality of life for our nation’s heroes by raising, training, and placing service dogs and other highly skilled canines, free of charge, with lifetime support of the partnerships. There is no cost to a veteran for the service dogs they raise, train, and place, or for the training they provide.

Preorder Pets in Space 2 and be the first to meet my pet, Shiza

Embrace the Romance: Pets in Space 2 is now available for preorder. Click your link below so you get all the pet goodness on the very first day.

Pets In Space 2 is a science fiction romance anthology by twelve NY Times and USA Today best selling and award-winning authors. My story in the anthology is called “Pet Trade,” and it’s set in my Central Galactic Concordance universe. The timeline puts it between Pico’s Crush and Jumper’s Hope, but think of it as a side trip, rather than part of the main story arc.

The vast Central Galactic Concordance strictly prohibits genetic experimentation and alteration of humans on any of its 500 member planets. Unfortunately, animals are not included in those regulations…

Veterinarian Bethnee Bakonin has made a home for herself on a frontier planet in the frozen north. Her minder talent for healing all kinds of animals would ordinarily assure her success, but her unwilling stint in the shady pet trade industry left her damaged and scared.

“Volunteered” for a black-box research project, elite forces Jumper Axur Tragon now has dangerous experimental tech in his cybernetic limbs. He escapes the project and steals a freighter, but ship damage forces him to crash-land in the northern mountains of a frontier planet. He’s surprised to discover the freighter’s cargo contains a secret shipment of designer pets. Determined to do right by them, he enlists reluctant Bethnee’s aid in caring for them—a definite challenge, considering Bethnee is terrified of him.

They will need all the help they can get from their unusual pets to save the day when ruthless mercenaries pose a threat. Can Axur and Bethnee work together to overcome their limitations, or will they lose everything they have vowed to protect – including each other?