Now you can preorder Last Ship Off Polaris-G and have it instantly delivered to your ereader on release day. You  know how it is, you get busy, you forget to check your email for the author's new release announcement, or you're on vacation, and next thing you know, you've missed the release day for the book that your friends are already reading. Click one of the links below to save yourself from that awful fate! 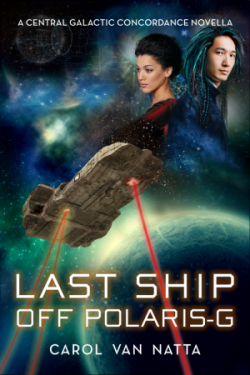 Frontier planet Polaris-Gamma is dying, afflicted by a suspiciously-timed blight that destroys all crops. Worse, the whole system is now under military quarantine by the Central Galactic Concordance to prevent the catastrophic blight from spreading. The settlers must escape—or perish.

Caught behind the blockade, independent trader Gavril Danilovich finds his interstellar trading ship commandeered in the desperate plan to escape. He tells himself that's the only reason he stays, and not because he's worried about the woman he walked out on two years ago—who still lives on Pol-G.

Supply depot manager Anitra Helden races to gather the last of Pol-G's assets. Her plan to launch a mothballed freighter off Pol-G may be crazy—but it can work, if she can talk Gavril into helping. Their precious cargo? Four thousand stranded colonists.

Can Anitra and Gavril, and their ragtag crew get past the deadly military blockade?

It's a desperate bid for freedom in deadly deep space—get your copy of Last Ship Off Polaris-G today!

Series note: The events in Last Ship Off Polaris-G take place several years before Overload Flux (Central Galactic Concordance, Book 1). Think of it as an introduction to the series, and a foreshadowing of things—and people—to come.