What would a screenplay adaptation of Overload Flux, the first book in my space opera series, look like? Glad you asked. 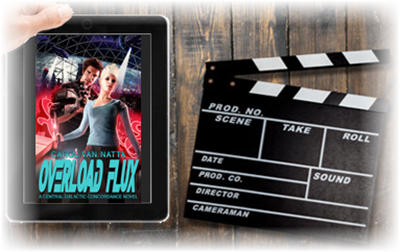 Books get made into movies all the time, even science fiction books (just ask Andy Weir about The Martian). Even series get made into films, such as Harry Potter and The Lord of the Rings. For the most part (JK Rowling excepted), the original author doesn't write the screenplay adaptation. The two media are different, and the writing skillsets needed are different. In books, we know what the main characters are thinking because we're in their heads. For example, take this quick sentence: “Margie was glad Bill didn't see her steal the can of cat food, but she still felt guilty, knowing he wouldn't approve.” The film version would have to rely on the externalities (yes, it's a word, because I said so) — Margie loitering around the pet food aisle, checking to make sure Bill wasn't watching her, slipping the can into her pocket, then looking guilty when Bill says something about hating people who steal.

By the same token, twenty seconds of screen time can set up an entire city, starting with the big panorama shot, and zooming in on a freeway, then on a traffic jam, then on one particular car caught in that traffic jam, then on the antsy bank robbers in the car. The book version would probably take a page descriptive paragraphs to provide the same information.

A few weeks ago, a kind and interesting fellow named Ira Schwartz (see his bio below) offered to adapt a few pages from one of my books into a screenplay version. Ira is a professional freelance screenwriter; film production companies hire him to write original works, edit screenplays, and to adapt books for the screen. He made the “see what it takes to turn a book into a screenplay” offer on a Facebook group for authors, as a fun and instructive exercise, and I took him up on it. I purposefully sent him a challenging passage, one that demonstrates why my Central Galactic Concordance series is likely a poor candidate for film adaptation.

Remember what I said above, about being in character's heads? A significant part of my book series involves people with “minder” talents — telepathy, telekinesis, patterns — that are ALL in people's heads. Luka, the male main character in Overload Flux, has minder talents. Furthermore, Mairwen, the female main character, has extraordinary senses, much better than average, and that's all in her head, too. So the challenge to Ira, the screenwriter, is visualizing how that might look on film, then figuring out how to invent dialog and action that substitute for the characters' thoughts.

Most people would think adapting a novel to the screen would be easy work. I mean you are already given the story right? Well… it’s not. Having done several I can tell you it is extremely difficult having to pick and choose what stays in and what goes. You not only have to write the screenplay but you are also editing someone else’s work… a work they care about as much as you care about yours. Now having said all that, there are special cases that need extra deep thought, especially in Science Fiction, and especially where characters have mental talents. I am sure most of you have seen the movie Dune or Star Treks original pilot “The Cage.” In both, the writers decided to have the actors actually speak their thoughts as a voice over. It moves the scene forward and does so quickly but if over used like in Dune can get old fast. You can also use a device that can translate thoughts into words or you can just have the character speak his thoughts as dialog. All three do work well, but greatly depend on the original story. Bottom line is you always try to keep the author's original intent intact as best you can. Not just out of respect for him/her but because there is a reason why the author put it there in the first place.

Screenplays Are Close to Work for Hire

First, I should tell you that I know something about the film industry, more from the indie side. I was the co-executive director of a film festival for seven years, and have worked on camera as an actor and behind the scenes in multiple films, from zero-budget guerilla shorts to larger budget independent films. I still know people in the industry because it's actually a pretty small world.

Whereas every film starts as words on a page, screenwriters rarely get the glory. Let's say a producer loves your book, and miraculously finds funding to make the film, signs on a name actor or two, and has a deal with a reputable distributor. She options your book (the equivalent of buying your movie rights), then she hires Ira Schwartz to write the screenplay, because he's experienced, a good writer, and meets deadlines. Ira could just write it on his own, but he's a nice guy and prefers working with the author to get things just right. You and Ira spend days and weeks on the screenplay, then turn it over to the producer. That's not, I repeat, NOT what ends up on the screen. I'll let Ira explain:

What people need to understand up front is a screenplay is a road map of the film for the producer, director, actors, and production personnel. It is not something that is intended to be read by the general public. They will use it to build sets, props and costumes, find locations, allow the director to set up shots and allow the actors to understand the characters they are playing. It is also used by the producers to set up a budget for the film. Most importantly it is also not set in stone. Rewrites are usually the norm, with some writers actually rewriting pages on the very day of the scene is to be shot.

Screenplay writing is just this side of work for hire. Ira may get credit for it (and the Academy Award if his screenplay wins), and he may get royalties, depending on the deal, but he's signed away his rights forever. Original authors rarely get royalties, unless they have the clout of Stephen King or John Grisham. (TV series adaptations, by the way, are a different deal, and a discussion for another day.) 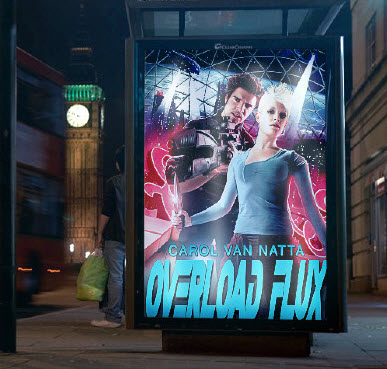 Nota Bene for Authors Who Want to See Their Work on the Big Screen: Please understand that your precious characters, scenes, and subplots may not make it onto the screen. It may sound totally wonderful to have a film version of your book, and the producer may dangle a lot of money in front of you, but you must be prepared for the production company to mangle the parts you care about the most, and that you must smile and say you like it when the arts reporter asks. If you can't handle that, hire a kick-ass entertainment lawyer and agent, negotiate for more control over the screenplay, casting, final edit, etc., and be prepared to walk away from the deal.

So, here's what Ira did for me: PDF of the original text from Overload Flux • PDF of Ira's first draft screenplay version

If Ira and I were working on this together for real, instead of just for fun, I'd talk to him about easing back on Mairwen's sociability in this scene, to give her room to grow later. Ira cleverly finessed the problem of showing the audience that Mairwen carries hidden knives galore.

The chances that my books will be made into films are vanishingly small, but it's fun to think about.

“While I have been writing most of my life, I have been doing screenwriting professionally for the past 25 years. I have been produced twice: In the Shadow of the Cobra starring Sean Young and Rutger Hauer, and Devil Winds starring Joe Lando and Nicole Eggert. I am presently in pre-production of my latest film, The Christmas Gift, starring Kevin Sorbo and directed by action director Isaac Florentine. I have work uncredited for numerous studios over the years including Dean Devlin's and Roland Emmerick's Centropolis Productions.

“Also, for the last 12 years I have done weekly articles for the webzine ‘A Hollywood Republican.' Though this is a Republican website, my articles represent a much wider view including Democrat, Conservative, and Liberal positions. Besides my political writing, I have also written movie reviews, obituaries of the passing of some of Hollywood’s greatest, as well as several short stories. Some of my articles for ‘The Hollywood Republican' have also been picked up by other publications and shared across the web.