Shifter Mate Magic, Writing to Market, and What I'm Work On (Podcast)

This is my author podcast number 8, wherein I talk about Shifter Mate Magic, and writing what you love and writing for money. It was thunder and lightning, very very frightening, during the podcast, and the cats were under the bed. Ignore the video glitch in the middle; the audio is fine.

Astute readers will note the number above and deduce there are previous videos:

This podcast is a recorded Facebook Live session from Friday, 18 May 2018. See https://youtu.be/qgX7VhTt4j0

For those who won't watch a 13-minute of video of anything but an interesting segment about maned wolves from South America (not that I blame you), here's the TL;DW (too long; didn't watch) synopsis. 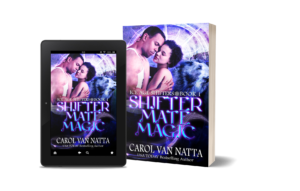 It's thunder-raining here today, and the cats are all under the bed. This includes the podcast producer cat, who blames humans for the weather.

It's release day! Shifter Mate Magic is here! OK, it was actually Tuesday 15 May, but close enough. It's the first in my new Ice Age Shifters paranormal romance series. he book already has some nice reviews, for which I'm profoundly grateful. I'm glad readers are willing to take the chance on following me to a new series.

Writing to Market (Love vs. Money)

You may have heard the phrase “write to market,” which means writing something readers will buy. It's sometimes a difficult balance for authors, because the lovely book of your heart might only resonate with a few readers, whereas another story that feels easier or shallower might appeal to a lot of readers. Let's face it, authors like to eat regularly and sleep indoors as much as the next person, and that takes money.

Writing to market can also mean “chasing a fad,” which is generally not very successful, because the author isn't putting his or her own stamp on something, they're just writing knock-off stories with the aim of cashing in. Nothing wrong with money — I'd love it if my stories sold thousands of copies per week — but then the fad-chasing author becomes risk averse. Sort of like the big Hollywood studios, afraid of taking a chance in case it might not bring in as MUCH money, so they remake Mission: Impossible or Spider Man or Mutiny on the Bounty for the umpteenth time, or reboot Magnum PI, Charmed, or Roswell because there's a guaranteed audience for it.

I'm fairly new to the indie author business game, as these things go, and a mere duckling in a tiny pond compared to authors with backlists of 40 or 70 or 150 books. I'm still finding my way with the stories I want to tell, the stories that are holding protest marches in my head, demanding they be committed to digital ink and shared with readers.

All my books, regardless of the genre, have fantastical elements, action and adventure, and romance. Fantasy and adventure, because we readers don't want to read about the 49 times you went to the grocery store and nothing happened, we want to read about the 50th time where it became the battlefield between attacking aliens and the secret force of produce managers defending our planet. Romance because I like the justice and inherent hope. There's enough tragedy in the world, and others can write it well, but it's not what I want to spend my time writing or reading.

What I'm Working on Now

My muse, as I've mentioned before, thinks in series. I have three more books coming out in the Ice Age Shifters series, because, duh, I couldn't call it a series if there weren't more books. They have a small story arc that shows up mostly in the last two books. You'll see when you read them (hint, hint).

The next book is Shift of Destiny. Book 1, Shifter Mate Magic is set in 1993, but Shift of Destiny is present day. You'll get to see more of Kotoyeesinay, the magical sanctuary town from book 1. You'll also learn how to pronounce the town's name. Shift of Destiny goes on preorder 31 May 2018, and releases 26 June. I'll tell you more about that next time, and read an excerpt.

For my space opera series, that has the big damn story arc going on. The next book will be a novella called Cats of War, and will appear in the upcoming Embrace the Passion: Pets in Space 3 anthology. Cats of War is in the very capable hands of my professional editor. I love the story, and can't wait to tell you more about it. Also, too, I desperately want to read the stories from the other 10 authors in this year's anthology. It'll be out 9 October 2018.

After I finish book 4 in the Ice Age Shifters series, I'll be working on Spark Transform, book 5 in the Central Galactic Concordance series. I'm excited about returning to this universe, because the big damn story arc only halfway done. The “interesting times” curse is about to come to the galaxy, and this story, and the one after it, have been clamoring in my head for some time now.

I've had to break it to the cats that the outline for Spark Transform does not, at present, include any cats. They are very put out. 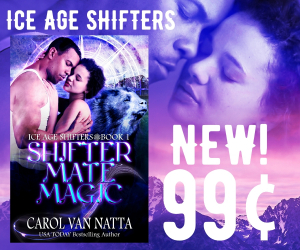 In my next podcast, I'll talk more about the next books in the Ice Age Shifters series, and read an excerpt from Shift of Destiny.

If you're so inclined, you can watch me live on Facebook on an upcoming Friday.