Humans have good reasons for their atavistic fear of wolves. They work in packs, are clever, and good at hunting big prey and bringing it down. Prey such as stray humans who are hunting for food themselves. Now imagine the wolves after you are bigger, heavier, and built to thrive in the Ice Age. That describes Canis dirus, otherwise known as prehistoric dire wolves.

As I mentioned in other posts on prehistoric bears and prehistoric lions, my Ice Age Shifters® series asks the question: What happens if a shapeshifter's animal side turns out to be a throwback to an earlier species? As you might imagine, this difference isn't always welcome. In some shifter communities, tradition trumps acceptance.

Dire wolves are one of the most famous species of prehistoric Ice Age animals. And thanks to Game of Thrones, their fame has grown in recent years. They were muscular, with massive jaws, but more slender legs than contemporary wolves. They are the most common fossil remains found in the La Brea Tar Pits. This is probably because they hunted in cooperative packs. Meaning that if one member got stuck in the tarry death trap, others of the pack would try to help, dooming them all.

Paleontologists have competing theories on the evolution of wolves in general. The ancestors of dire wolves likely originated in North America and spread all over the world. Prehistoric dire wolves thrived in North America, Central America, and South America during the Ice Age. For the most part, they weren't that much bigger than the largest of today's wolves, but they were heavier and more brawny.

Dire wolves lost the evolutionary competition and died out at the end of the Ice Age. Paleontologists guess this is because the large prey they depended on died out. Also, humans probably killed them at every opportunity out of fear, and out of annoyance when they lost their valuable food animals to the wolf pack. Much like today, I imagine.

Two of my Ice Age Shifters series books feature prehistoric dire wolves, Heart of a Dire Wolf and Dire Wolf Wanted. The lead characters of the books are sisters born of different mothers but have the same father.

In the Ice Age Shifters world, I decided that dire wolves have as much coat color variation as the various modern wolf species. In Heart of a Dire Wolf, Skyla Chakal's human side shows her Chinese mother's heritage. Her dire wolf side is burly with thick black fur. Since prehistoric dire wolves successfully hunted anything and everything, I figured that modern shifters likely have the same instinctive fear of dire wolves that ordinary humans do.

Skyla is a peaceable people pleaser, so sharing a soul with a scary dire wolf didn't win her many friends. Consequently, she uses her abundant magical ability to craft an illusion that fools most other shifters into believing her animal side is a shy maned wolf from South America. Yes, she's aware that maned wolves aren't really wolves, they're more like foxes on stilts, but she counts on the fact that most shifters don't know better. 😉

The path to peace and harmony for Ice Age shifters is rarely easy, or even visible. Skyla meets her mate in dire (snerk!) circumstances. She'll have to let loose her bad-ass side if she wants to win the day.

A dire wolf shifter and her would-be tiger-shifter mate must face down deadly hunters and greedy wizards in a mysterious northern town.

Skyla, prehistoric dire wolf shifter, and Nic, sexy tiger shifter, recognize their true mate in each other. Problem is, they’re prisoners of an underground auction. To stay together, they must escape captivity, avoid ruthless hunters, and figure out how to work together if they’re going to crack the secrets of a mysterious new-old sanctuary town. And they better hurry, because the greedy wizards are after the fabled treasures of this vulnerable sanctuary town—and them. 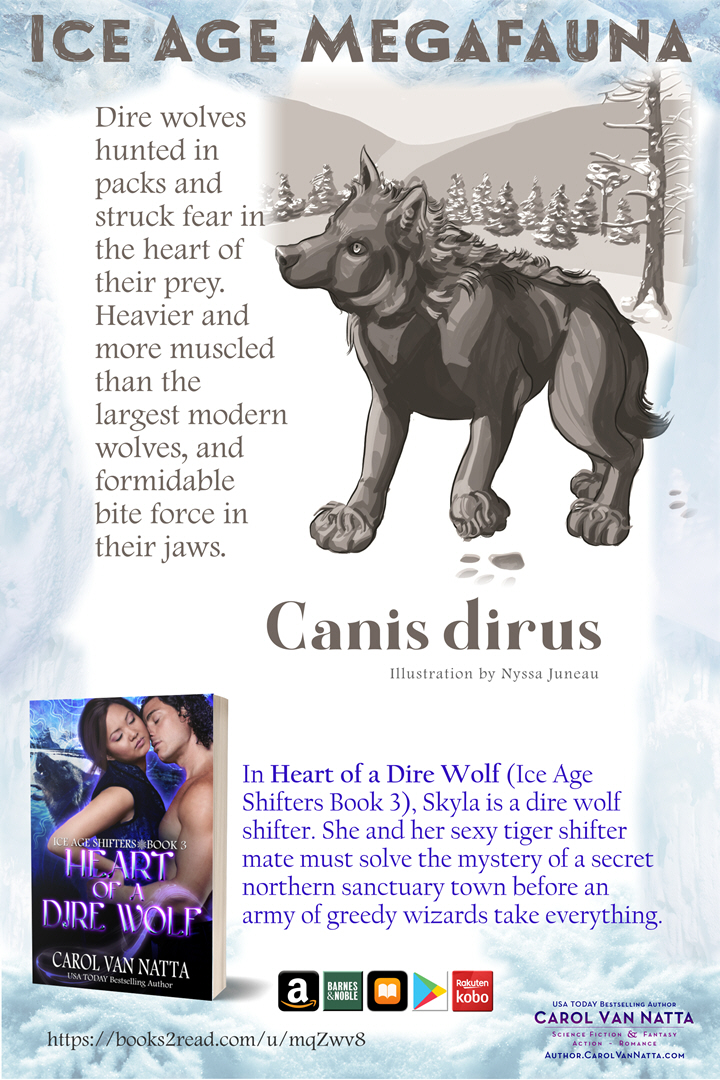