Authors in the Wild

Admit it: “Authors in the wild” sounds more thrilling that “authors at a convention,” which is what really happened. Science fiction and fantasy romance author Melisse Aires and I attended the 2016 Fort Collins Comic Convention. More below. But first…

It's a long weekend for folks in the U.S., so why not pick up a few books for your ereader while they're on sale? Science fiction and fantasy, all vendors, and all 99¢ (or the equivalent in your market). You could pick up MINDER RISING, from my space opera series, for a proverbial song. 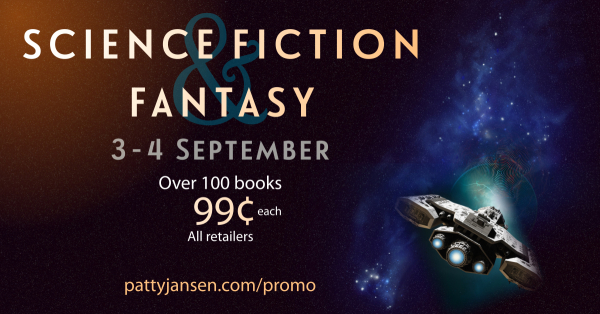 Photos from Authors in the Wild

Melisse and I shared a vendor table at the 2016 Fort Collins Comic Convention on August 27. Our table's cuteness alone should have draw in the crowds (snerk), but we offered candy, too. We're pretty sure the attendee demographic skewed about 15 years younger than people who read our books, but we did get to meet other regional authors. 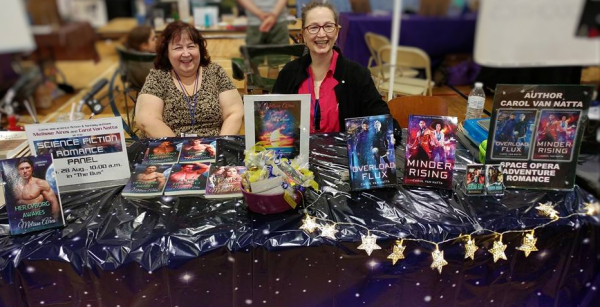 On Sunday, we participated in a panel, Science Fiction Romance. Considering it was at 10:00a after a late night, we were pleasantly surprised to have 13 people in the audience. We got some interesting questions, too, including by some young ladies who are interested in creating a science fiction romance graphic novel. We told them we hadn't seen one, but we'd be their first customer. 😉 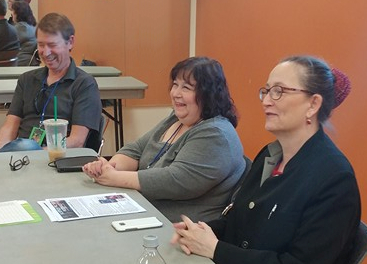 That charming fellow on the left is Drew Bankston, a Fort Collins science fiction author. {Melisse is in the middle, and I'm on the right, just in case you can't tell us apart.} Melisse is working on a new story in her Diaspora worlds series, and Drew is working on the third book in his Tokorel series. Me, I'm in the middle of writing Jumper's Hope, book 4 of my space opera series.

By the way, we prepared a handout for the panel, with a definition of science fiction romance (SFR) as a genre—the story has to have both a true romance, with a happy ending, and science fiction, such that the story would fall apart if you removed either element. We also included some “Must-Read SFR,” suggestions on where to find more SFR, and some tips from other SFR authors on how to write. I made a web version of it, too, with links.