Hello, Carol here. I may have mentioned that I'm one of twelve authors in this year's Pets in Space® 5 limited-edition science fiction romance anthology. I invited my fellow author and buddy Pauline Baird Jones over to my blog to tell me about her story and how she came up with her pet. Er, frog. Nice frog. By the way, General's Holiday is set in her excellent Project Enterprise science fiction universe.

Every year I am determined to figure out my characters and story and THEN work in my pet and every year I get caught by an animal I see online somewhere. So it’s no surprise that it happened me again this year. 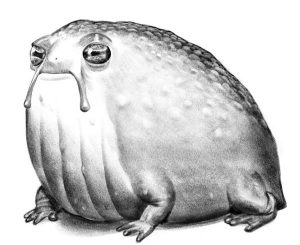 I saw this very unusual frog well before I started working on my story and he was IT. Of course, when it came time to actually sit down and write the story, my first thought was, “What were you thinking?”

A frog? (I couldn’t find an image I could buy or use, so here’s a link to the “inspiring” frog: https://www.sadanduseless.com/rain-frogs/)

But there he was. He even had a name: Blooban.

We might have stared at each other for a while.

And then the story began to percolate—always with the question simmering at the edge of that percolating: how on earth can a frog make a difference in a story set in outer space?

I had to do a lot of mental digging and pushing both myself and my characters, not to mention some serious consultations with Blooban, to answer that question (to find out, you’ll need to read “General’s Holiday” in Pets in Space 5!)

Here’s the scene where General Halliwell and Blooban meet for the first time:

General John Halliwell, United States Air Force and Commander of the Expeditionary Force to the Garradian Galaxy, woke when the frog landed on his chest and knocked the wind out of him.

Not that he knew it was a frog at first. He thought it was a dog until it croaked. Like a frog. A really big frog. It was close to his face and there was enough light to see the frog’s jowls. They reminded him of the ambassador he’d just sent back to Earth aboard the Apollo. The resemblance was heightened by its air of a potentate. Its purple eyes were on the huge side. It blinked slowly and croaked again.

He might have been relieved about the croaks. Thanks to his recent encounters with sentient talking animals, he’d halfway been expecting a speech to go with those jowls.

“Blooban,” the voice was scolding as someone scooped the frog off his chest, but it was also, well, a bedroom voice; sultry and rich in tone. “You woke him. That’s rude.”

About the author: USA Today Bestselling author Pauline Baird Jones never liked reality, so she writes books. She likes to wander among the genres, rampaging like Godzilla, because she does love peril mixed in her romance. Loves chocolate, bacon, flamingoes, and mid-century modern anything.

It’s time for an escape! Pets in Space® 5 is back for the fifth amazing year! Escape to new worlds with twelve of today’s top Science Fiction Romance authors. They have written 12 original, never-before-released stories filled with action, adventure, suspense, humor, and romance that will take you out of this world. The giving doesn’t stop there. For the fifth year, Pets in Space® will be donating a portion of the first month proceeds to Hero-Dogs.org, a non-profit charity that supports our veterans and first-responders. If you're ready to forget the world around you and make a difference while you're having fun, grab your copy before it’s gone!

Get PETS IN SPACE 5 Today! 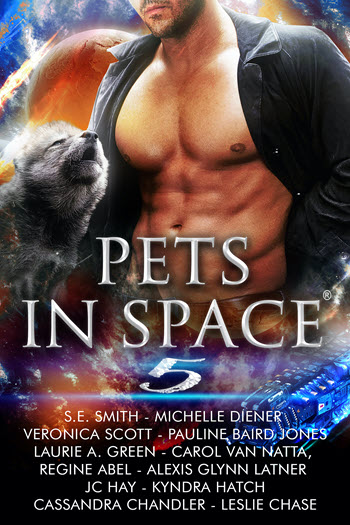 A lady, a frog, and the General that wanted to be Picard…

General John Halliwell, Commander of the Project Enterprise Earth Expedition, has spent most of his time in the Garradian Galaxy being shot at and shooting back. When a mysterious and intriguing lady arrives on Kikk asking for some non-shooting help, he is intrigued enough to listen.

All Naxe has ever known is a life of hiding and providing. With the end of the war, freedom still feels further than ever. Determined to end the stalemate that threatens her people, she will break all the rules—even the one where she asks General Halliwell for help.

Of course, she should have known better. Trouble—and the shooting—starts the moment she brings the general and his team to the Scoyfol ships. It won’t matter that the enterprising General Halliwell is the first man to remind her she is a woman if they are dead! Is it possible to end the stalemate, survive the shooting, and still find a happily ever after?