Some friends of mine think I'm silly enough in person that I should be sharing it on camera. It sounded like fun, so I tried it. I figured you'd prefer that I not ramble on like your loony great aunt Sarah who's been sipping the moonshine again, so I answered a question I often get, once people find out I'm an author: What genre do you write?

This is a recorded Facebook Live session from Friday, 26 January 2018.

Some of my friends (and they know who they are) don't want to watch a 10-minute of video of anyone that isn't Idris Elba or Cate Blanchett (not that I blame them), so here's the TL;DW (that's “too long; didn't WATCH”) synopsis.

My books could fit with space opera, SFR, or science fantasy 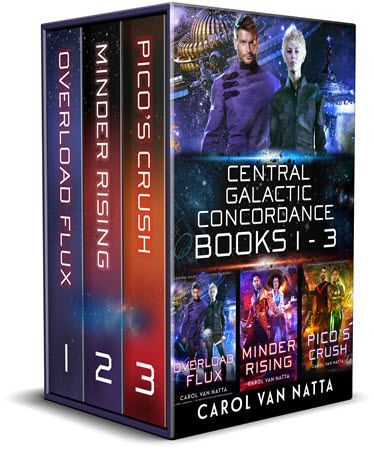 The genre name of “space opera” was actually meant to be an insult. It was coined by a critic who thought authors who wrote sprawling adventures, relationships, epic space battles, and romance plots were ruining his precious, lofty science fiction genre. Authors and publishers liked the genre name just fine, and began using it, much to his annoyance. Space opera examples include Firefly, Star Trek, Babylon 5 (though it's arguably mainstream SF), and The Expanse.

Science fiction romance works best when the story would fall apart without either the science fiction or the romance elements. My books have this, but perhaps a little light on the romance side. The genre name is fairly new, but Andre Norton, Linnea Sinclair, Anne McCaffrey, the Millers (Liaden universe), and others all included bona fide romances in their science fiction stories.

Although my books involve the military, they aren't military SF. That genre is what it sounds like, with emphasis on hardware, guns, military strategy, and war. Unfortunately, most military SF is very light on characterization; you could probably replace the main characters with a desk and a coffee mug, and plot would be the same.

Science fantasy is a blend of science fiction and magic—Star Wars is a prime example. Some people think mental talents—like what the minders in my books have—are automatically fantasy, but my series has a solid scientific basis for them, so it's not magic.

Space opera fits my Central Galactic Concordance series best. I deliberately include romances in my space opera series, because the big damn story arc is about rebellion. Anyone who has lived through perilous times can tell you it's exciting, but also nerve-wracking and frightening. The romances in my books are meant to provide a counterbalance of hope and justice.

On collecting eyeglasses and socks

Surprisingly, some people actually watched the live broadcast (I didn't announce or promote it), and I responded to their comments. We talked about collecting socks (I have two drawers stuffed full of them) and eyeglasses (I have several different pairs for computer, distance, and sun).

I'll probably do more of these, because it was fun, and as you've probably figured out by now, I Haz Opinionz.

P.S. My YouTube channel also has this video, if that's easier for you to watch: https://www.youtube.com/c/CarolVanNatta.